Innovation is not just about creating new technologies and products but also about improving everyday objects such as, say, saucepans or fruit bowls with the use of technology. While it might seem quite futuristic to have a saucepan with a chip in it, that might happen in the future as chip costs really go down and people realise the joy of not having to sponge up spilt milk! Here we are with this month’s dose of inspiration, which includes a few such ‘everyday’ objects too. -- Janani Gopalakrishnan Vikram

No scratches from this foldable power plug 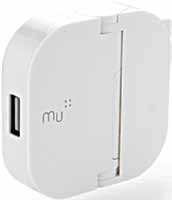 What do you do when a power plug’s pins scratch your laptop or desk? A lot of us might have just mumbled about it, but when Min-Kyu Choi took a scratch from a power plug in 2009, while studying at London’s Royal Academy, he started redesigning the ubiquitous power plug together with friend Matthew Judkins. The foldable power plug designed by the duo is a radically new design that can fit in the user’s pocket. The design won prestigious design awards, and is now being manufactured and marketed as the Mu Foldable Plug, through their London-based startup Made in Mind.

What’s inside: Redesigning the power plug is no easy task, since it has been in its current form for decades now, and people have fixed notions about how a power plug should look and work. So, when Choi and Judkins started redesigning this everyday product, they first analysed the whole element of the product, and figured out what could or could not be changed. What could not change, due to standardisation, were the dimensions of the pins. So they just rearranged the pin positions so that the end-product could be made slimmer. The result of their design explorations is a technology called PVT that allows the live and neutral pins, on the bottom of the plug, to pivot 90 degrees so they align with the earth pin on the top. The two flaps on the side then collapse, helping push everything into a little compartment that measures only 14×55×60 mm3—70 per cent less than standard the UK plug sizes.

The folding power plug took three years to develop and is protected by six patents. It is now available in the market as a USB charger for smartphones, tablets and music players. Its developers are now working on developing a Mu power cord for charging laptops.
Web: https://www.themu.co.uk

It can be quite irritating when you pick up a fruit from a bowl and realise that it is spoilt. Not only does it smell and taste rotten, it could also spoil the other fruits in the bowl. How many times have you wished there was some way to know in advance when a fruit is nearing its end-of-life? Jagjit Chodha of Brunel University, London, has designed a smart bowl that could do just that. Showcased at the Made in Brunel 2013 exhibition, the bowl caught the fancy of many a visitor.

What’s inside: The solution comprises a sensor system embedded in the fruit bowl, and an array of lights for notification. The sensors monitor the levels of ethylene—a gas released during the ripening process. When the levels increase, it triggers the alarm, which warns the user to consume the fruits before they rot. A seemingly simple solution, it can surely help contain food wastage if developed and manufactured at a reasonable cost.
Web: http://madeinbrunel.com 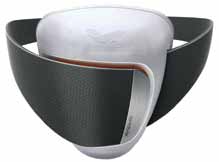 It is common these days to see people wearing masks to keep out dust, other pollutants and air-borne infections. This is so in China too. Due to the poor air quality there, current-generation Chinese people are finicky about preventive healthcare, and therefore there are a lot of bulletins, mobile apps, etc that give updates about air quality there, quite like traffic updates. However, there is another catch there, as the Chinese are also very sceptical of faceless data. Hence Frog Design has come up with an air mask design called AirWaves that serves a dual purpose: it acts as an air mask, and also helps read and feed air quality data into a central system. By leveraging community and bringing granularity into air quality data, it is expected to make the information more trustworthy. However, in an interview with BBC, one of the company’s directors admitted that there will be several political and governmental discussions to get through before this product is brought to the market, as the air quality is a key aspect of socio-economic development and is a ‘loaded’ topic.

What’s inside: By adding particle sensors to an air mask, AirWaves combines the filtering and measurement of air quality into a single product. The Bluetooth-enabled mask reads many parameters of air quality, and passes on this data to an associated mobile app, which feeds it into a larger network. The app also lets you browse the consolidated, real-time data at the desired level of detail: in your city, neighbourhood or places you will be passing on your route. The project is still in an early stage and many challenges have to be overcome before it can be even prototyped. For example, there is the mechanical challenge of how to fit a particle filter, model, battery and power management unit into the mask without compromising flexibility and comfort. It is likely that the end-product will be a combination of a plastic shell to house the components, and a softer material at the skin contact points, not to forget the traditional filter tissue. All of these might get done soon, since the project is in the hands of Azure Yang and Mingmin Wang—two of Frog’s best designers. Once the product is designed, they will start working on the connectivity and software aspects.
Web: http://info.frogdesign.com/rs/aricent/images/frog_Mobile_Ecosystems-Wearable-Technology.pdf