Innovation: Brought to You by All

Innovation is no longer the preserve of technologists. Everybody is innovating, thanks to community help from sites like Quirky, KickStarter and IdeaConnection. If you have an idea for a useful product, and the know-how to design and develop it, you can easily source the required funds to develop, manufacture and even sell the product. Get inspired with these set of innovations, to start your own project--Janani Gopalakrishnan Vikram

Innovation is no longer the preserve of technologists. Everybody is innovating, thanks to community help from sites like Quirky, KickStarter and IdeaConnection. If you have an idea for a useful product, and the know-how to design and develop it, you can easily source the required funds to develop, manufacture and even sell the product. Apart from these, there are industry-funded university labs cum incubators, angel investors, seed funders and mentors who help grow an idea into a product and a start-up to see it through. So today it is true that where there is a will, there is a way! Get inspired yet again, with this month’s set of innovations, to start your own project

In a paper recently published by the National Academy of Sciences, Dr Marc Behl and his team from the Institute of Biomaterial Science in Teltow, part of the Helmholtz-Zentrum Geesthacht, Germany, have described temperature-memory polymer actuators that can drive small motors such as heat engines. Temperature-controlled shape memory plastics exist today, but these are capable of changing form only once. However, this team has now developed plastics that can repeatedly change from one shape to another and back again, responding to temperature fluctuations within a selected range. They have dubbed the material as ‘polymer actuators,’ and believe that it can be used for numerous exciting applications ranging from automatic window blinds that can function without electricity, to new kinds of heat engines.

What’s inside: At molecular level, the active polymers are built of structural elements that undergo changes to their mobility within a very wide temperature range. To transform the nano-level activity into macroscopic movement, some of these structural elements are assigned to an internal scaffold that determines the geometry of the motion and orients the motion. This is the technological basis of the newly-developed polymer actuators, which can change shape many hundreds of times as the ambient temperature goes above or below a threshold value. 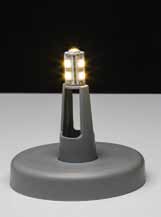 Wirefreelight is a patented Swedish innovation that can transfer wireless electric power over a short distance to light up specially-designed LED lamps. It is an ideal option when you wish to aesthetically light up a place without any visible cables, holders, screws, holes, etc. The Wirefreelight range includes wireless-powered LED spotlights, do-it-yourself kits to convert wired table lamps into wireless, illumination for glass shelves, and expansion kits.

What’s inside: The system comprises power plates, connection box, adaptor and special LED lamps. Power plates are connected to the connection box, and from there to the adaptor. One adaptor and connection box can power four power plates. Power plates, which transmit power wirelessly, can be placed on the roof or behind shelves or furniture, at a distance of up to 50 mm from the LED lamps to be lit. Power goes through all non-metallic materials like wood and glass. Wireless energy exists as a small sphere around each power plate, and is absorbed only by the specially-designed LED lamps. The LED lights are generally 1W long-life warm-white 2700k, 100LM, corresponding to a 15W bulb. All Wirefreelight products are CE marked and tested and approved by a certified laboratory.
Web: www.wirefreelight.com 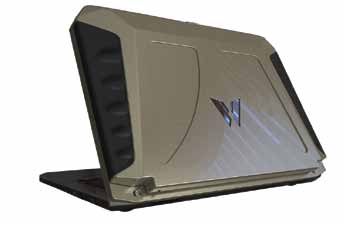 In July this year, WeWi Telecommunications Inc., an Ontario-based company, unveiled a solar-powered laptop designed to bypass the electricity grid. The product will be especially useful in rural areas of developing countries, where power supply is unreliable.

WeWi’s founders came up with the idea in early 2012, after visiting Ghana on business. Over the next 14 months, they designed Sol—a solar-powered laptop. The first order of around 20,000 units, priced around $300, is likely to ship within the next few months. There have been solar-powered laptops in the past, including one from Samsung that was launched in 2010. However, these devices did not take off as they took too long to charge. WeWi hopes to have overcome these problems with its efficient design.