Energy-efficiency is extremely important, and India could become the playground for innovation in this area. In the energy-efficiency space, the amount of energy consumed for cooling is disproportionately high. Fifty to sixty per cent energy is consumed in controlling the environment (cooling or heating).

Due to power fluctuations in India, most people use voltage stabilisers with ACs. But these waste too much power and are also unreliable. A product is needed that can handle power fluctuations, does not use a stabiliser and works in true Indian conditions. It should also be able to handle extreme temperature conditions.

An inverter AC should provide fast cooling once switched on, with minimum energy consumption. It should provide rated cooling up to 50°C, operating at any voltage between 120V and 300V. 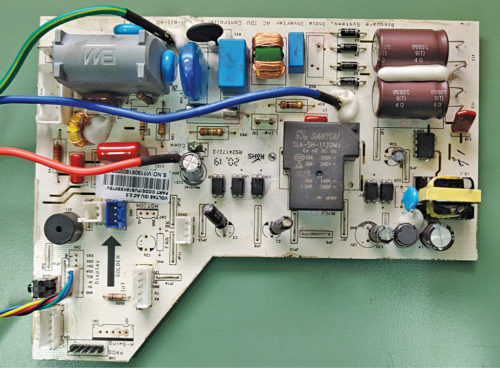 Bisquare Systems have developed AI-based inverter AC controllers for IDU and ODU that have moved intelligence from the outdoor unit to the indoor unit in the inverter AC. This has allowed them to implement a lot of functionalities. Controls are based on artificial intelligence (AI), machine learning and fuzzy logic instead of conventional PID controller.

This achieves almost thirty to forty per cent faster initial cooling, while consuming twenty to thirty per cent less energy. Since they did not change the basic thermodynamics of the AC, they could not improve it further. However, utilisation is better with the latest control technologies.

The company has also built-in smart home capabilities into the AC, which means it is inherently Internet of Things (IoT)-enabled. It has an IoT integration layer into basic hardware, which enables adding a communication interface. This allows the AC to collaborate with other ACs and IoT devices. The product has gone through extensive operational, environmental and EMI testing. It has also been tested and approved by Voltas for production.

However, such ACs consume more energy. This creates a problem during power cuts, when the ACs switch on again. As a result, they trip while using on-power grid or a generator. So, only fewer ACs can be used at a time.

Bisquare controller enables the ACs to scale down the power requirement as per maximum power setting. When put in generator or backup mode, initially it does not take up high power. If there is IoT enablement, the ACs can talk to each other. The warmer-room AC can tell the cooler-room AC to not increase speed, and will increase its own speed and cool the room faster.

Another important feature built-in into the product is slow ramp-up (surge). When recovering from a power shed, it lets the AC consume power very slowly. So, the grid will get loaded slowly and never be overloaded. Thus, the same grid can deliver 1.5 times the power.

Ramendra S. Baoni, founder, Bi-square Systems, says, “The ACs have to go through improvements. We are working on the thermodynamics part, along with a design with much higher levels of efficiency. We are also working on the advanced version of ACs with smart home integration, which can be controlled through Alexa and Google Home. We have started developing the same controllers for commercial refrigerators.”

Device To Check Undernutrition At Schools