More Power to Your Phone With XS Powercard

Would it not be great to have a power bank that is portable, stylish and has some cool additional features, too? To address this, Xyra, an Indian start-up, has come up with a new product called XS Powercard—a fashionable credit-card-sized gadget that easily fits into a wallet/purse, has built-in cables and detachable flash storage, and can transfer or synchronise data between the phone and a computer. --Anagha P. 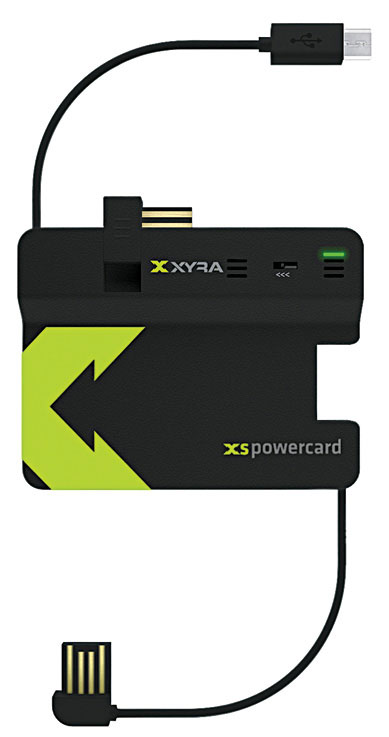 With smartphones getting smarter, their battery consumption is also increasing. Normally, a person has to charge a phone at least twice daily. But this becomes a headache when travelling, as the user may not find charging points everywhere, or have the time to wait till the phone is completely charged. That is why power banks got introduced, to charge the device on-the-go. However, many power banks available in the market today are bulky.

Would it not be great to have a power bank that is portable, stylish and has some cool additional features, too? To address this, Xyra, an Indian start-up, has come up with a new product called XS Powercard—a fashionable credit-card-sized gadget that easily fits into a wallet/purse, has built-in cables and detachable flash storage, and can transfer or synchronise data between the phone and a computer. It comes with variable charging speeds and priority charging, too.

Most of us do not leave the house without our phone and wallet. The proposition of the developers is ‘Do not forget your wallet and you will not forget your battery pack.’

It runs on a built-in non-replaceable 2200mAh lithium-polymer battery, encapsulated in two plastic halves that are ultrasonically welded together with other electronics in the circuitry. The battery lasts for over 500 cycles and has 150 days standby time until discharge.

XS Powercard is 82.5×63.0x6.3mm in size and weighs just about 65gm. The body is made of ten per cent glass-filled polycarbonate, has smooth matte finish and comes in white and black colour variants.

Strategic casing design. It has an ergonomic and lightweight design that fits into a wallet, effectively using the existing space above the credit cards in it. That is, you can place the gadget in the topmost credit card slot with other credit cards stacked below it, and it adds only 6.3mm thickness to the wallet.

Cables are placed strategically to avoid tangling and measure up to 30.5cm (1-foot) when extended to their full length. Moreover, it allows the user to talk or text on the phone even while charging.

Eliminating switches. The smart power-management feature automatically and instantly detects and starts charging the phone when connected to the card. This eliminates the need for an on/off switch.

PCB size and space management. It was mainly critical thinking, intricate design choices and immaculate space management that allowed fitting everything into the small size, according to the team.

The team also spent a lot of time trying to miniaturise the printed circuit board (PCB) to the smallest size.

Single-port smartcharging. The single-port charging allows users to simultaneously connect XS Powercard to the phone and USB port of a computer, laptop or adaptor. The team made it smart by introducing priority charging, which means that, when the gadget is connected to both phone and USB port, power is first directed to the phone, allowing it to charge. Once the phone is fully-charged, the gadget redirects power to charge itself. So you do not have to separately charge the two. This is ideal for those who charge their phones every night, as they can wake up to find both the devices charged.

Following is how it was implemented:
Current drawn by the phone was measured and calibrated to understand when it is completely-charged. Then, this system was hardwired into the device. The same could have been achieved with software as well but the team decided to take the hardware route as it was cheaper.