Nowadays, with hundreds of TV channels to choose from, it is quite a task to remember channel numbers or know what is running on which channel at a time. Mobile applications that act as TV guides are available, but these are complicated to use, especially for the elderly. To overcome this shortcoming, innovators at Sensara Technologies have introduced a device that can turn your mobile into one consolidated remote for your TV, STB and other devices. The device is called Sensy Remote.

Sensara initially developed their own TV guide mobile application called Sensy. However, soon they realised the common problem of people misplacing their remote control or using separate remotes for separate systems. Thus started their journey towards something new.

After a couple of iterations, the team launched Sensy Remote in its current avatar—an Android- and iOS-capable, battery-powered, Bluetooth remote to control TVs, STBs as well as air-conditioners. It took the team just over a year to come up with the product, which they introduced in the market early this year.

One of the most significant challenges during device development was to add support for STBs/remotes from the lesser known cable operators across the country. Replacement remotes for set-top boxes provided by local cable operators of different regions were hard to come by. Fortunately, help came from the common users of these STBs, who sent their remotes to the team. Developers utilised and integrated the pertinent services into their support database. 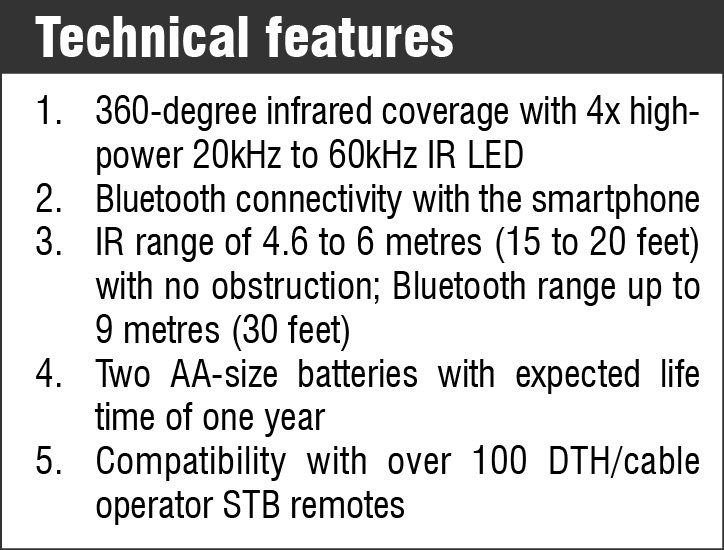 The science behind Sensy

Sensy Remote is a Bluetooth-driven device that lets you control your TV and STB with the help of your smartphone. It automatically connects with your mobile device via Bluetooth, and receives commands to send infrared signals to the TV or STB. You can send these commands by using a mobile application developed by the company, called the Sensy app. The Sensy application is compatible with both iOS and Android. It stores and supports data for over a hundred DTH or STB brand settings. The application sends commands to Sensy Remote through BLE (Bluetooth Low Energy, also called Bluetooth Smart).

The Sensy Remote has an integrated circuit (IC), which acts both as a microcontroller and a Bluetooth transceiver. Other major components in the circuit are a 16MHz crystal oscillator, a bulk capacitor, a p-channel MOSFET, and four LEDs that emit infrared signals to the TV or STB.

In the circuit, the Bluetooth transceiver receives commands from the mobile application. The microcontroller interprets these commands and the channel selected on the application. With successful interpretation, infrared (IR) signals are generated, which are then emitted through IR LEDs.

Adityanag Nagesh, co-founder, Sensara, adds, “The four LEDs installed on different sides of Sensy eliminate the need to place the unit in a straight line with the TV or STB in order to work. As long as you keep the remote within 4.6m (15-feet) distance from your device and there is no solid obstruction in between, the TV or STB can catch signals from Sensy irrespective of the position it is placed in the room.”

The 16MHz crystal provides a clock to the microcontroller IC to coordinate actions of the circuit. The bulk capacitor avoids voltage drop when IR LEDs are fired with a high current during IR signal transmission. Bluetooth’s low energy consumption enables the entire circuit to run on two AA-size batteries for a long time. The p-channel MOSFET in the battery path avoids circuit damage from wrong insertion of batteries. The circuit also supports on/off actions based on signals, allowing users to switch on or off their TVs and STBs using their smartphone.

What you can expect with Sensy

2. Use your smartphone as a single consolidated remote for supported appliances (TV, STB and AC)—which reduces the possibility of damage or loss of a remote

6. No need to remember channel numbers; you can view and select channels and ongoing programmes from the mobile application

The Sensy mobile application is user-friendly with features like one-touch channel switching, voice control and search based on genre, actor, programme or language. Recently, it included support for air-conditioners also, which is currently in Beta phase. Going forward, the Sensy developers plan to add support for even more devices.
The biggest USP of the whole setup is that customers need not purchase or upgrade to a new hardware for compatibility with newer device additions. All the upgrades are managed through the software, so essentially the mobile application gets updated.

The Sensy Remote is priced at ₹ 1199, and can be purchased from Amazon’s e-commerce site or the official Sensy website.

Device To Check Undernutrition At Schools