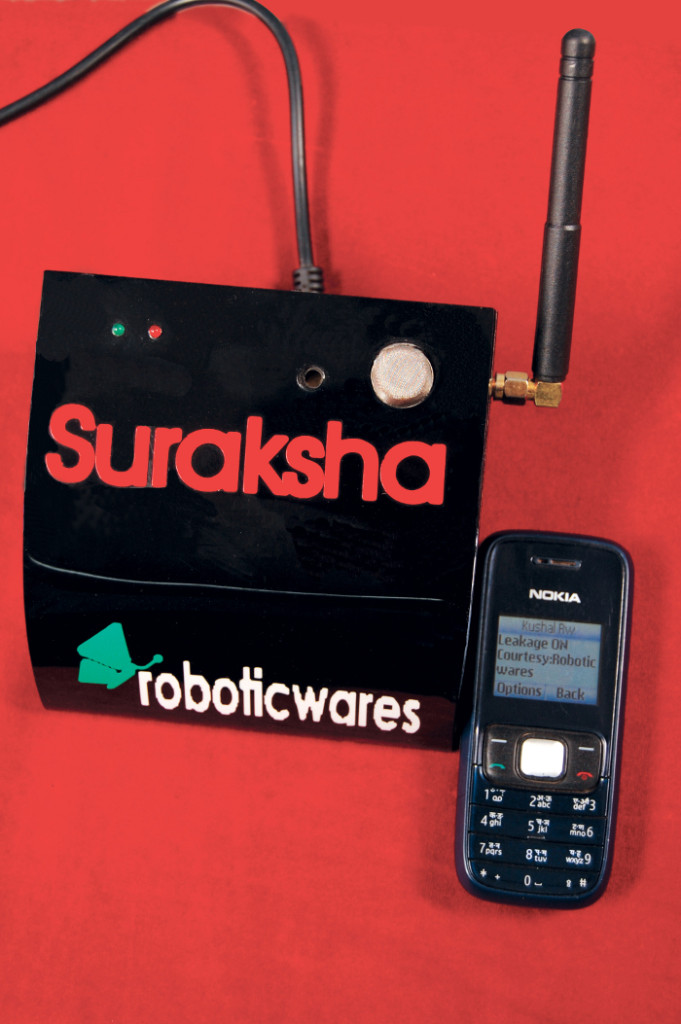 MAY 2012: Prevention is better than cure-especially to secure your home against possible fire due to LPG leakage when you are away on a holiday or work. Thankfully, to avoid the loss of lives and property due to LPG leakage, the team at RoboticWares has developed an SMS-based feedback system that sends an SMS alert to phone numbers prestored in the system as soon as its sensor detects LPG leakage. They call the device Suraksha, meaning ‘safety’ in English.

The idea for Suraksha cropped up after Kumar read about a gas leak in Bhubaneswar that cost many lives. Nahata had memories of a similar incident in Chandni Chowk, New Delhi, a few years ago. The two felt an immediate need for developing an alert system to warn people and avoid such accidents.

The device is attached to an AC power source and can be configured to communicate with a maximum of five people by registering their mobile numbers on the device.

Users have to insert their SIM cards into the device and then add the number to Surakhsa’s database. In case of a gas leakage, the device rings an alarm and sends an SMS to registered users informing them about the impending danger.

“The device uses Atmel’s ATmega8 microcontroller as it has all the features we require, like analogue-to-digital conversion (ADC), universal asynchronous receiver/transmitter (UART), TWI (I2C), timers and interrupts,” shares Kumar.

Kumar adds, “The most important thing is that all the related compilers and software are Open Source. For the GSM module, we initially tested Wavecom, SIM300, SIM900B and u-blox. Due to easy product availability and support, we decided to choose the u-blox module.