Always wanted to get into the exciting field of robotics but didn’t know where to start? Let us introduce you to one of the most innovative robotic kits of the decade—it could very well be described as the Lego set of the engineering community -- Ashwin Gopinath 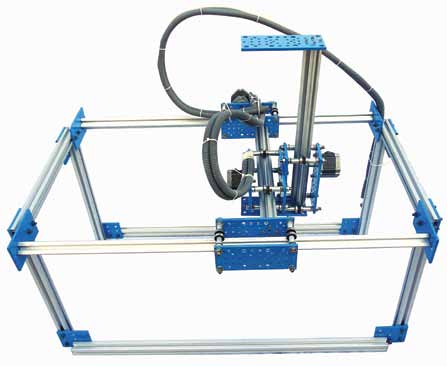 Remember your childhood, when a bucket of Lego bricks was like having infiniteammo for your imagination? Growing up doesn’t mean you have to give up those moments. In fact, you can now use your imagination and make stuff that is much more complex and has far greater capabilities. In this article, we discuss an interesting kit that will allow you to create a myriad of robotic structures to perform various functions.

Merlyn TRN-1
At its simplest, it is a robotic kit that helps you design up to 28 different types of fundamental robots, be it a linear moving robot, rotary robotic arm or even a robot with cylindrical axis. If you dig beneath the surface a little, it is a completely modular, electronic, rugged kit that not only allows you to create robots but also helps you add new features to them. This one kit allows a huge array of possibilities to create, control and reconfigure robots—wha-ever be the need.

It is basically a gadget, the parts of which can be attached together to create any kind of motion. You can add your regular devices to this gadget. The best part is that you can use it to perform functions required for industrial automation—such is the flexibilit of this device.

This kit is the brainchild of Biju Ronnie Varkey, owner of Designs and Projects Development (DPD), Patiala. A robotics enthusiast himself, Varkey worked on this product for two long years, making sure that it is built and functions exactly the way it is meant to be.

On asking what drove this idea in his mind, Varkey says, “While teaching robotics at engineering colleges, I noticed that there was nothing available at hand to teach students in a way that they would not only remember but also enjoy learning robotics. The most I saw anywhere was a couple of microcontrollers, line follower robots and the like. I sincerely felt that this was a huge waste of engineering talent and hence I started working on this project two years ago by designing and then fine-tuningthe initial design according to the feedbacks I received from students and teachers, who are as much responsible for the finaldesign as anyone who worked on it.”

“Apart from generating an interest in robotics, I also wanted students, who come out having learnt the basics of robotics, to be able to say that they had an employable education,” he adds.

Features of Merlyn TRN-1
The kit is basically divided into three parts: electronics, which includes microcontrollers, motors and drivers for motors; mechanical part, which comprises all the axes; and software segment, which controls microcontrollers used in the kit.

The kit uses a stepper motor for movement along all the axes, including the rotary axis that has a geared set-up. The motor used is a 2A stepper motor with independent drivers for each of the motors. These drivers are controlled by a microcontroller; in case of TRN-1, an Arduino Mega 2560 board. You can also drive it by connecting it to your PC or laptop.

“Using an Arduino board provides a good number of inputs/outputs (useful for attaching a number of sensors) and is also easy to program, highly stable and extremely flexible.Stepper motors can easily be replaced with DC motors or servo motors, and all of them can be controlled directly by the board without much fuss,” Varkey says. 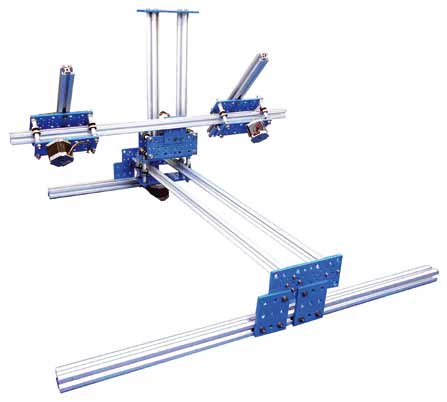 The Arduino board is capable of driving up to eight axes (eight stepper motors) at the same time. Hence your system has around eight degrees of freedom. You can add a proximity sensor, IR sensor or what-ever suits you. The different motors are con-nected to each other to help the robot move the way you like.

Each of the three parts of the kit can be customised to a great degree, enabling smooth functioning and lending great frequency to the robot that you want to design.

Obstacles
Talking about the problems encountered during the materialisation of the idea, Varkey says, “Since the idea was already in my head after the visits to engineering colleges, I spent a lot of time listening to the target users of our system, making notes of the problems they were facing, what they wanted and things they wanted in the solution. Then, it took us nearly a year to reach the point where we are today. This model is actually based on the 10th prototype we rolled out. The firstone we made could only be turned into a single basic robotic system.”

“To add value, Merlyn TRN-1 was worked on extensively to enable it to be turned into 28 fundamentally different types of robotic systems. You can cascade different kits together to increase the envelope in which you are working along with the range/scope of the work you are doing. The best part is that you are not limited by the mechanical, electronics or software scheme of things utilised in the robot,” he adds.

The components were especially made from anodised aluminium, ensuring a rugged yet light design.