The Changing Face Of India’s Defence Sector In Perspective

India is one of the largest importers of defence equipment worldwide. However, the government is now planning to reduce the country’s dependence on imports with focus on indigenous production of defence equipment. With a slew of recently announced reforms, the defence sector will surely gain more momentum in its path to self-reliance in defence production.

India is one of the largest importers of defence equipment in the world. Imports account for 60-65 per cent of the country’s military requirements, which are being met by foreign suppliers. In a significant move, the government seeks to reduce electronics import with focus on indigenous production of defence equipment. This will encourage increased participation of the private sector in defence manufacturing. With a slew of reforms recently announced by the government, including banning the import of weapons that can be made in the country, corporatisation of Ordnance Factory Board (OFB), and raising foreign direct investment (FDI) in defence manufacturing to 74 per cent from 49 per cent, the defence sector will surely gain more momentum in its path to self-reliance in defence production.

In tandem with current developments in the defence sector, a webinar titled ‘Defence Electronics—Policy Focus on Domestic Manufacturing, Procurement and Atmanirbharta’ was organised by ELCINA (Electronic Industry Association of India) in collaboration with Ernst & Young (EY). The discussion focused on various aspects, including defence production, domestic manufacturing, offset policy, opportunities for MSMEs and startups, among others.

In its latest efforts to boost indigenous defence production, the government is planning to introduce a list of weapons/platforms to ban imports with year-wise timelines. Priority will be given to the indigenisation of spares that are currently imported, and a separate provision will be introduced in the budget to buy military hardware from domestic manufacturers.

Sharing his perspective on the measures taken by the government, Lt Gen. AKS Chandele (retd) says, “The government will prepare a negative list of items and equipment, which will ban the import of particular equipment. So far, we have been relying on the defence procurement procedure, which has been incentive-based starting from IBM and on the other side by global. So, the idea is to incentivise domestic design and manufacture. The negative list will ensure that items which can be produced in the country, and which the Indian industry has the capability of producing, shall not be open for import.”

Highlighting the scenario on the manufacturing aspect, Sanjay Jaju says, “India has a huge requirement, and the bulk of this requirement has been met through imported routes in the past. Nevertheless, we have made significant progress over the years, and a large number of defence platforms are being manufactured in our country.”

He adds, “We also have a robust private sector, which is taking shape from 2001 onward, and close to 450 licenses have been given to the private sector. Many of these companies have been producing state-of-the-art and world-class equipment, which has been used by our services. We have also started to make decent progress in terms of exporting some of our products. And we have set a target of 5 billion dollars of export from India by 2024-25.”

India has been making steady progress in exports and has seen a growth of over five times in the last four years. On a positive note, Jaju says, “There is an increase in FDI cap for the defence sector, and notification will get issued shortly. Our focus should not be just manufactured in India but manufacture in India for the world. We have an online portal, which issues clearances to all the exporters in a time-bound manner. Last year, we gave all the clearances within the timeline that we stipulated.”

Besides, the discussion also focused on the space sector. In the latest development, the government has announced to bring more private players in the space segment in an effort to promote ‘self-reliant India’ mission. Col. H.S. Shankar says, “After the announcement, there have been some inputs coming from the Indian Space Research Organisation (ISRO) and government of India. ISRO has come out with an expression of interest for handing over the total manufacturing, assembling, integration, and testing of the PSLV 3 program to a consortium of private industries. So, two or three such consortiums have been made, and ISRO will request the proposal or tender. On the basis of it, ISRO will decide which particular consortium will be given the task of building and making its own factory. This is a very good example of how ISRO wants to utilise the private industry. And we welcome this.” 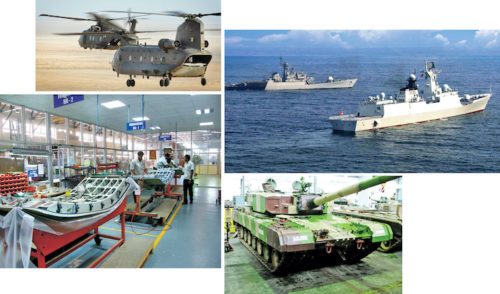 He adds, “Another good thing that we would like to share is that request for proposals (RFPs), which we have floated around 70 to 75 per cent, are directed at the Indian industry. So, we are in sync with the Make in India initiative. In fact, with the new reforms, this will gather momentum.”

While discussing the General Staff Qualitative Requirements (GSQRs) of weapons and platforms, Lt Gen. Chandele points out, “The government has suggested that the armed forces, when they make their wish lists, should have realistic GSQR. A little word of caution—it should not dilute the operational parameters of the equipment, which is to be procured.

You will require equipment that is comparable and better than what the adversary possesses. You can’t fight tomorrow’s war or today’s war with yesterday’s tools. So, we require modern state-of-the-art equipment. And there should be a balance between what is operationally required and what is desired.”

As far as the offset policy is concerned, Emmanuel de Roquefeuil highlights, “We are a bit cautious with the offset part. It could be much better if more incentives were given. Because at the end of it, the purpose of the offset part of the DDP is to invite companies like Thales and others. They need to invite those companies which are ready to invest in India. This part of the documents could be improved.”

Further, he welcomed the initiative of raising the foreign direct investment (FDI) cap from 49 per cent to 74 per cent via the automatic route, which was announced by the government of India recently.

The discussion also highlighted the inspection process of the equipment, which is a concern considering its time-consuming process. JD Patil says, “The one big bugbear in the defence sector has always been the inspection process. Until the inspection is not completed, the equipment is not stamped for delivery. Since the outbreak of the Covid-19, digital has taken some amazing levels of initiatives. Now, we have started inspecting equipment online with proper kinds of cameras, special software, etc. In fact, we have already delivered three systems within four weeks—fully digitally inspected and digitally certified. Before this, it was unthinkable in the defence industry—everything had to be carried out on paper and done in a set format. I think those myths are falling out and falling apart. These bad times are teaching us new things. Some of the long-run processes and procedures which have been holding the industry have been changing substantially.”

Opportunities for MSMEs and startups

The role of startups and MSMEs is significant to help India in achieving its goal of indigenisation and self-reliance in the defence sector. Their participation can boost innovation and technology development in the defence manufacturing ecosystem. With the government’s focus on leveraging small businesses and startups, there is an increase in MSMEs’ share in India’s current defence space.

Stressing on the importance of startups, Jaju says, “We have fairly strong and robust startups in the country, which is the second-largest ecosystem. We run a programme called ‘Innovation for Defence Excellence,’ and as part of this programme, we have been doing ‘Defence India Startup Challenge.’ Now, we have close to fifty startups, which are working on futuristic technologies. We expect these startups to start contributing along with the bigger players in the development of futuristic technologies, and work in tandem to create a defence manufacturing ecosystem.”

Lastly, Ankit Tyagi also gave a presentation where he talked about the demand for innovative products and equipment, which will rise in areas of cybersecurity, surveillance, communications, and electronic warfare equipment. “The innovation category will become the impetus to initiate this technology revolution for the Indian Armed Forces, which is again a great opportunity. And finally, with the global downturn, the companies across are looking for new market spaces and local partners. So, it is expected that many foreign companies will look to further expand into the Indian market through collaborations and JVs. And this will give an opportunity to the MSME sector,” he says.

The discussion concluded with several queries raised by the audience concerning the domestic defence industry, which was addressed by the panel of experts with fresh insights and thoughts.