High-end technology is vital to the success of a defence program. From soldiers in the field to decision-makers in the command and control centres, the flow of secure, real-time and accurate information helps shape the outcome of any military campaign. This network is a labyrinth of complex signal-processing technologies powered by the next generation of electronics systems. Somshubhro Pal Choudhry, MD, Analog Devices, and Paul K. Klonowski, global director, aerospace and defence, Analog Devices, speak with Rahul Chopra and Dilin Anand of EFY 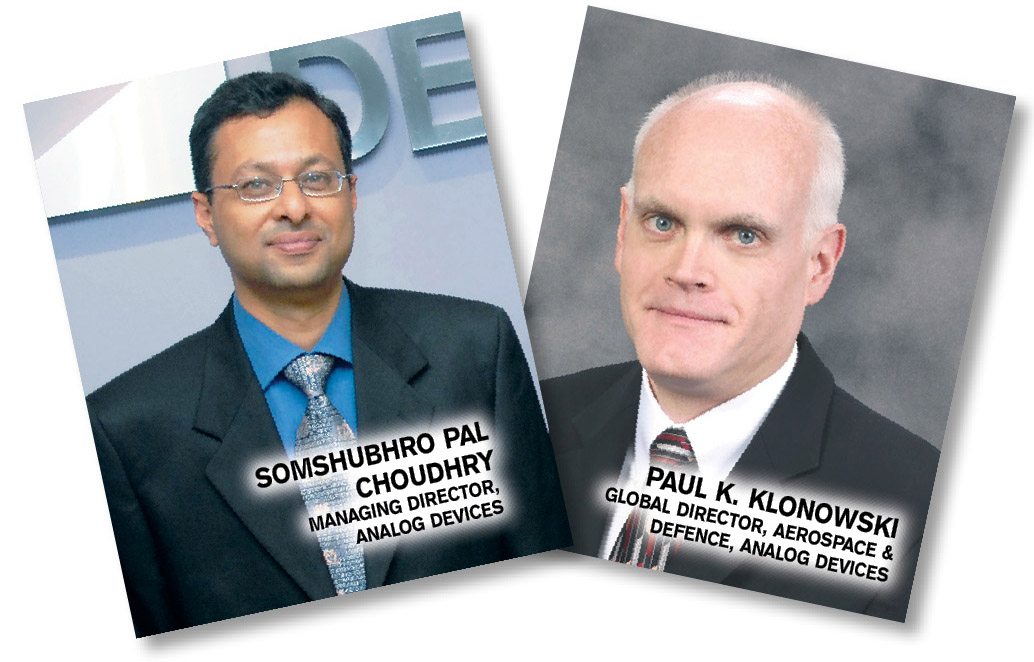 Q. What kind of evolution has been happening on the communications link between troops and their headquarters?
A. Let us start with basic hand-held radios used by military personnel. These radios have to support both data and voice, and work on extremely low power so that the personnel need not carry additional packs of battery. Additionally, these have to be super-secure and support a wide frequency band with a way to skip and switch frequencies in milliseconds to prevent jamming and spying. The recent trend is software defined radios (SDRs), where frequency and bandwidth are completely controlled by software, making a single platform highly configurable for versatile communication needs.

Similarly, these radios need to communicate among themselves and to base stations. Configurability for frequency and bandwidth, ultra-low power consumption, ability to run any modified version of Long-Term Evolution (LTE), or 3G stack, and high security are the requirements for such base stations in the field that is mostly mobile. For back-haul solutions from these mobile base stations back to headquarters, a range of solutions is used including repeaters, microwaves and even satellites.

Q. A lot of military technology has been moved onto the consumer world, allowing consumers to benefit from military research and development. Has it ever happened the other way around?
A. This is a reverse trend that is starting to happen in recent years. For decades, most technologies and innovations went from defence and space to enterprises and service providers and finally made their way to consumers. But, the last decade has demonstrated that consumers are the most avid technology adopters. It is only now that military is taking on smartphones, tablets, wearable devices, high-speed wireless networks like LTE, and securitising and ruggedising these for the battlefield. Smartphones, tablets, wearables and high-speed wireless networks that are now so prevalent in the consumer world are starting to change how military personnel use and exchange information. Military versions of these with modified stacks, added security layers and required ruggedisation are making their way to the defence sector.

Q. Please give some examples of this trend of consumer devices entering military space?
A. Today, wearable fitness devices are a craze in the consumer world. Wearable technologies are starting to play a crucial role in the military as well. Heart rates, perspiration rates and several other vital signs are getting monitored for soldiers and communicated back via a data link, to monitor health and send required medical help during an emergency.

Also, the rapid development and deployment of high-speed wireless technologies like 3G and now LTE have enabled literally the whole world to be connected. Defence industry is now using a modified version of 3G, LTE and Wi-Fi protocols along with necessary security for military communication, instead of relying on proprietary protocols they had used in the past.

Q. Like wearables, is there anything happening in the filed of the Internet of Things (IoT) on the military application side?
A. When we talk about the IoT in a military application, it is mostly around wireless sensor networks and related software protocols. However, everything starts from the sensor. Sensors, the signal chain that makes sense of data and converts it to digital, digital-signal processors, RF devices and Big Data are the main components of any IoT system. Our focus is on how to optimise the IoT in military via above-mentioned applications.

Another aspect of the IoT is energy harvesting, where we are working on several technologies on how best to leverage sunlight, ambient light or vibration to energise sensors and devices in the field.