Agriculture is the base of our survival, the source of what we consume. Traditionally, agriculture has been a ‘manned’ sector. But of late challenges in the form of labour shortage threaten its very survival. So, should agriculture finally give up its stubbornness and adopt technology? Let us find out

Agricultural robots are semi-autonomous machines capable of carrying out soil preparation, seeding, weeding, pest control, and other agricultural tasks. By automating many of the labour-intensive, repetitive tasks, farming efficiency can be increased.

In recent times, agriculture has been facing immense challenges. While the global population continues to grow, available agricultural land has been declining. The Covid-19 crisis has further aggravated the issue. Labour shortage had always been a major problem, but with the recent spate of lockdowns and labour movement restrictions, things have become worse. Adding insult to injury are the skyrocketing labour prices.

Much like in other major industries, technology offers a solution. The good news is that robotics and automation costs have been falling throughout the past two decades, which makes the possibility of automation too good to ignore.

As of autumn 2021, nearly fifty field and harvest robots were commercially available or in the advanced stages of development. These included:

The most commercially developed robots are milking robots and agricultural drones. Milking robots can be operated indoors and under unpredictable conditions. Cows can be easily trained to work with them.

Agricultural drones are best suited for imaging applications. Unmanned aerial vehicles (UAVs) can also be used for the delivery of organic herbicides to a field. The only issue here is that drones can only carry small payloads and have limited autonomy.

Another popular field robot is the weeding robot, which is meant for weed removal. The weeding robot helps eliminate manual weeding, which is quite labour-intensive. The robot also helps in cutting down the use of synthetic herbicides.

The state of development for a large diversity of depends upon how technically demanding it is. So, while milking robots are less complex to develop, making them highly commercially available, robots for fresh fruit and vegetable harvesting are undergoing research as they require complex AI systems for distinguishing crops at different stages of lifecycle and under different weather conditions.

While it is nice to conceptualise the development of autonomous tractors thanks to all the talk going around advanced driver-assistance systems (ADAS) and autonomous vehicles (AVs), an evolutionary pathway is ideal before self-driving tractors emerge. The first type is guidance tractors that help farmers drive tractors with less fatigue. It should also enable farmers to work under dark lighting conditions and ensure the entire field gets covered. A robust GPS technology is the best tool for assistance.

The next logical step would be the introduction of ‘follow-me’ tractors or a series of unmanned tractors controlled by a manned vehicle that effectively boosts driver productivity without facing any technical or legal complexity of creating a fully autonomous farm vehicle. 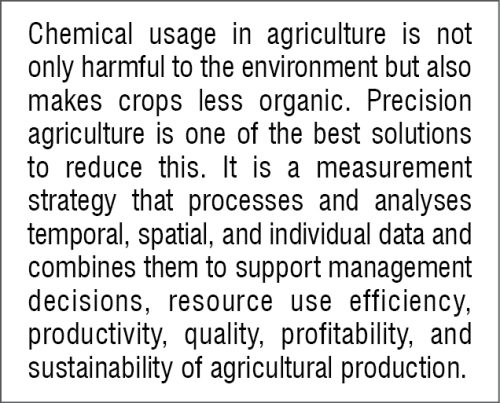 And, finally, there are fully autonomous driverless systems where operators control the vehicle from afar and human intervention is largely restricted to supervision and repair. Whilst this may happen before 2040, it is unlikely it will fully occur within the next few years, mostly due to the technical challenges and regulations.

Compared to industries such as automotive, adoption of robotics and other digital technologies has been slow in agriculture, mainly due to agricultural robotics being immature. Farmers would not risk their harvest and entire yearly revenue at the expense of adopting a piece of machinery that does not demonstrate benefits.

A decline in need for labour is another issue. So, it does not look like the transition to robotics will be rapid. Restrictions caused by the Covid-19 pandemic, coupled with lower profits, may also prevent farmers from investing in agricultural robotics.

And even if agricultural robots are used on a large scale, the operating costs, including subscription of software packages and RTK GPS systems, will be quite high. Only skilled people would be able to operate and repair different robot parts. 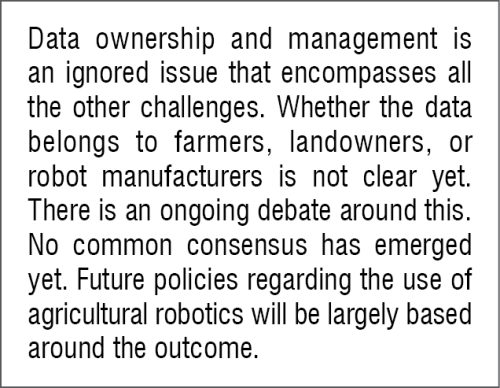 To mitigate the high upfront costs, robotics companies can offer a robot-as-a-service (RaaS) model where the farmer pays a subscription fee to the company that leases out the robot to the farmer. It would also mean that the farmers do not need to go through extensive training to operate the robot.

Attractive as it may seem, the RaaS model works only where there are trained operators nearby. Farms are often located in rural areas where there is no reliable 3G or 4G coverage. Robots need to be continuously connected to the internet for sending data in real time. It is doubtful whether robotic agricultural companies will be willing to get engineers or technicians out on the site for operating and repairing the robots. 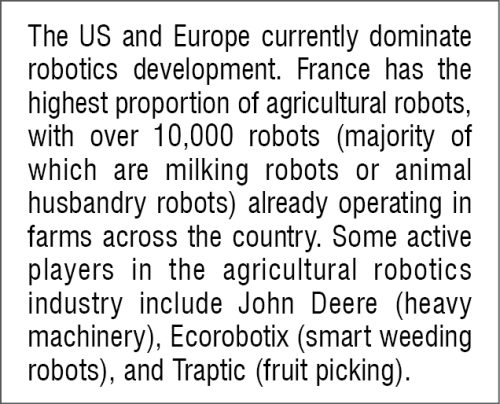 Answers to most of the challenges stated above lie in the problems. The agricultural sector has always been stubborn to adopt technology. But with rising food shortages and declining labour supply, there is no other option left. Once robotics is embraced by the agricultural sector on a wider scale, its global market will rise and continuously do so for the next ten years.

The article is based on IDTechEx webinars hosted by Dr Michael Dent and Yulin Wang, technology analysts at IDTechEx. It has been transcribed and curated by Vinay Prabhakar Minj, an IoT and audio electronics enthusiast at EFY.