How Anti-Collision System Works For Trains

An anti-collision system for trains is an electronic system that is designated to ensure safety of the passengers and proper operation of trains. It helps avoid the risk of dangerous and unexpected collisions of trains, which may be caused due to human errors or equipment failures. The GPS system described here was designed and invented by Rajaram Bojji and patented by Konkan Railway Corp. Ltd.

Anti-collision devices (ACDs) rely on global positioning system (GPS) satellites for position updates. These exchange information through radio frequency transmissions to automatically brake and prevent collisions. Applications of such ACDs have been refined to not only prevent midsection collisions but also to prevent their occurrences in station yards.

Let us take an example. An infrared (IR) sensor and IR transmitter is fitted on the locomotives of trains 1 and 2. The system works in the line-of-sight. The IR sensor is connected to the braking circuit on each train, which is further connected to a stepper motor that applies brakes to the train whenever it senses an approaching train in its line-of-sight.

Drawbacks of such an anti-collision system are:
1. The system fails on a curved path as it only works in line-of-sight
2. Cannot prevent rear-end, side-track collisions
3. Range of the IR system depends on IR transmitter power, which is inversely proportional to reaction time; the more the power, the lesser the reaction time
4. The system is affected by weather conditions such as rain and storms that interfere with the IR signal

A GPS based ACD is a self-acting microprocessor based electronic device. It takes inputs from GPS satellites and networks with other ACDs to detect collision-like situations. It has a range of about three kilometres for inter-ACD communication.

A GPS based ACD has four components:
1. GPS for getting position updates of locomotives
2. Command and control unit (CCU), which is the decision-making device in the system
3. Radio trans-receiver for inter anti-collision device radio communication
4. Automatic braking unit for stopping the locomotive

Locomotive ACD (fixed and moving). It is installed in the locomotive permanently along with the automatic braking unit.

Guard ACD (portable and moving). It is a portable ACD that acts as a backup to the locomotive ACD.

Station ACD (fixed). It is installed in the station master’s office. He or she can send a manual SOS by pressing SOS buttons on the ACD on noticing something unusual.

Level-crossing gate ACD (fixed). It is installed in a gateman’s cubicle and is used to inform other ACDs about any emergency at the level crossing.

Gate approach. Train approaches gate ST346. At approximately two kilometres from the gate, the message ‘Gate Approach’ flashes and the audio buzzer sounds for ten seconds on the driver console.

Gate open. Level-crossing gate ST346 is detected to be open. Audio-visual indication is automatically activated to draw the attention of the driver, and brakes are applied to reduce the speed to 15 kilometres per hour.

Gate occupied. Level-crossing gate ST346 is detected to be occupied by a road vehicle. Audio-visual indication is automatically activated to draw the attention of the driver, and brakes are applied to reduce the speed to 15 kilometres per hour.

However, there are situations where ACD cannot prevent collision. Some examples are:
1. When one of the trains is non-ACD
2. Adequate braking distance is not available when collision situation arises, but impact of collision would be considerably reduced
3. Failure of brakes in trains 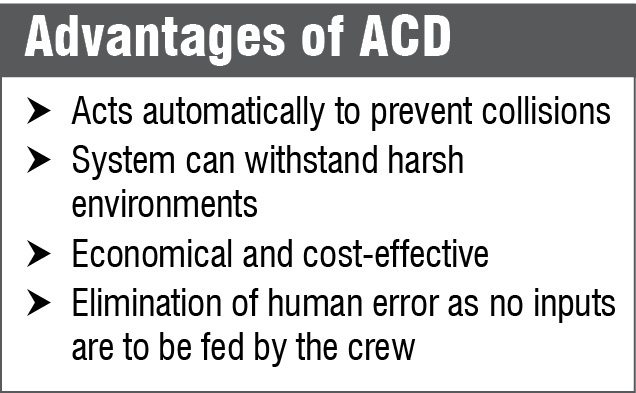 Akul Sabharwal is an electronics and communication engineer. He is currently working as R&D head at Sammi Electronics India Pvt Ltd