Have you ever wondered why your phone has three radios (LTE, Wi-Fi and Bluetooth), while your tablet and computer typically have two (Wi-Fi and Bluetooth)? For that matter, why do you know names like Wi-Fi, Bluetooth and LTE? What about 5G or Zigbee?

At the same time that wireless data-communication technology and standards are still in development, new standards and proprietary technologies (like Zigbee) are clamoring for attention. How do we separate the noise from what is real and important? Should consumers care about any of this? Figure 1, below, offers an impression of the variety of wireless technologies that play a role in our daily lives.

Despite all the marketing chatter, it is relatively easy to look at the bigger picture and understand where things are going. And as it is often the case, it can be helpful to remind ourselves how we got to where we are today.

There are only three things of overriding importance in radio technology, and we experience them all in our daily lives. These three things are range, data rate and power.

These three items fit together in an interesting way, a sort of basic law of physics. Try to improve one, and the two others must give way. Of course, general overall improvements have been made over time on all three, but the relationship between them is the same.

For instance, if you want increased data rate, then you must either lose range or increase the output power. Wi-Fi today, with its higher speeds (data rate), has less range than in the past and more often needs repeaters – this is one of the motivators for distributed Wi-Fi, or mesh Wi-Fi. This same relationship holds true for Zigbee (“low power Wi-Fi”). It essentially gets the same range as Wi-Fi, at a low data rate, but with significantly lower power, thereby achieving a very long battery life. 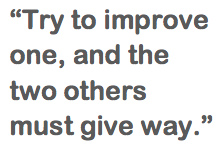 Back to the Radios Present in Phones and Laptops

Clearly a lot more can be said about this, but to a large extent, these parameters are the reasons you have three radios in your phone. One radio (LTE) to get the range to connect to the closest base station in your neighborhood; one radio (Wi-Fi) to get performance when you are at home or in the office; and one radio (Bluetooth) to enable short-range connectivity to the small devices that you carry with you, like your phone headset or your Fitbit.

Why, then, do laptops and tablets usually only have two radios? There is a logical answer, but we must also understand a bit of history.

A Brief History: the Technology Players

In a relatively short period of time, we have seen three new technologies develop and converge: 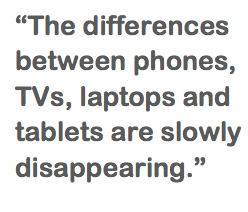 As technology progresses, the differences between phones, TVs, laptops and tablets are slowly disappearing. In a way, they are all becoming “networked computers,” but each still has its own history of wireless communication standards as each experienced its own transition from wired to wireless technology. Phones and computers had a more dynamic path, but because TVs are largely static (nonmobile) devices, the cable/satellite industry mostly stayed in its own wired world.