The arena of wireless communication is mostly dominated by radiofrequency (RF)-based technologies. The constant growth in Internet data traffic is challenging the existing technologies to provide higher throughput, better security, and lower cost. Along with RF, wireless communication also includes the systems that use the infrared (IR) regime of the electromagnetic spectrum. These systems are commonly coined as wireless optical communication (WOC) systems. The use of light in communication was ignited by the demonstration of the first working laser at Hughes Research Laboratories, California, in 1960. With the significant development in optoelectronic components and the market ecosystem over the last few years, WOC has gone through tremendous development.

As a broad classification, WOC can be divided into two categories: Indoor WOC and outdoor WOC, commonly known as free-space optical (FSO) communication.

The sub-division of the indoor WOC system is based on the viewing angle of the transmitter and receiver.

This type of indoor system is suitable for point-to-multipoint communication. The beam angle of the transmitter and field of view of the receiver are wide enough to avoid any stringent alignment requirement. This system allows limited user mobility.

In a tracked system, the receiver and the transmitter can track each other. Mechanical or electronic control needs to be implemented for effective tracking.

Terrestrial FSO system is used for building to building communication or metro area extension. This is primarily an LOS communication. It has applications in disaster recovery and x-haul of 3G/4G/5G mobile communications.

An inter-satellite link is a communication between two low Earth orbit (LEO) satellites. An inter-orbital link is established between LEO and geostationary Earth orbit (GEO) satellites. Tight alignment and tracking, low power consumption, and being lightweight are critical requirements for space applications.

The architecture of WOC system

A WOC system consists of three major subsystems: Transmitter, channel, and receiver. The block diagram of an FSO communication system is shown in Fig. 3. The role of transmit optics and receive optics are analogous to the antenna used in RF communication. 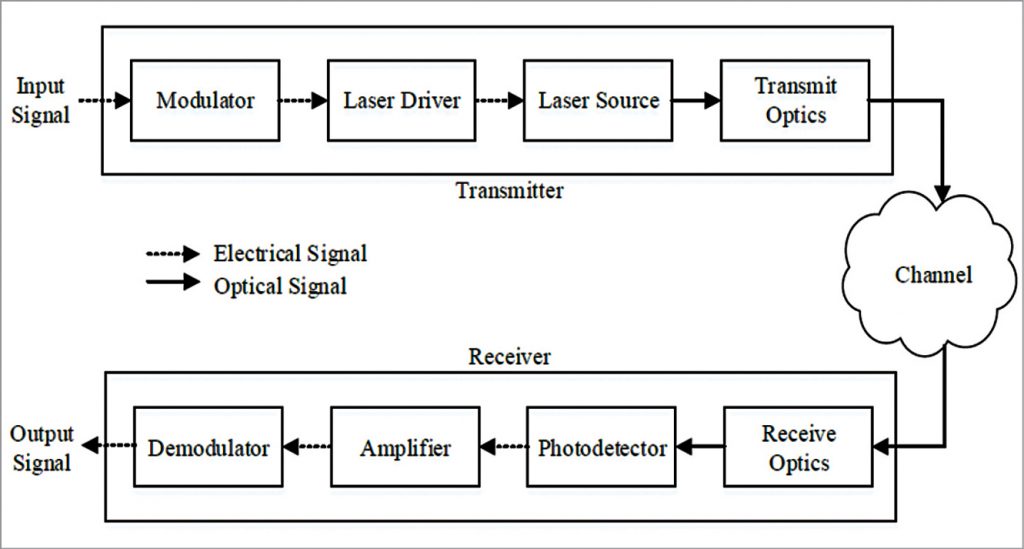 For the WOC system, the channel can be vacuum, atmosphere, or water. In case of the atmospheric channel, the signal faces random attenuation due to effects like fog, haze, cloud, and rain. Atmospheric turbulence is caused by random fluctuations of the refractive index of the medium due to random temperature fluctuations. Atmospheric turbulence is the main limiting factor for the performance of an FSO communication link.

The choice of wavelength is dependent on multiple factors like atmospheric effects, attenuation, eye safety regulations, availability, cost of components, and background noise power. Overall wavelength bands are the same as used in optical fibre communication.
The majority of FSO communication systems are designed to operate in the windows of 780-850nm and 1520-1600nm. The benefit of using these bands is that the components are readily available as these are used in fibre optic systems and other industrial and consumer applications.

Antenna gain is inversely proportional to the wavelength of operation. So, operating in lower wavelength bands is beneficial. But eye-safety regulations allow transmitting much more power in higher wavelengths.

The WOC system has several advantages over RF communication system due to the shorter wavelength of operation.

Due to narrow beam divergence, the received power intensity is higher for a given transmitted power. It allows a simpler and lighter transmitter and receiver design. Antenna gain is inversely proportional to the square of the operating wavelength. A small antenna in the WOC system can achieve higher gain.

Due to a very narrow beam divergence, LOS is a critical requirement for successful communication.

Again, due to narrow beam divergence, even building vibrations pose a severe issue to the establishment of a good communication link. Accurate pointing and tracking systems need to be deployed for reliable operation.

WOC communication is highly impacted by haze and fog due to the high attenuation of optical signals. Random temperature variations in day time cause random variation of the refractive index of the air. This atmospheric turbulence causes random intensity variation in the receiver.

The relative position of the sun with respect to the transmitter and receiver plays a crucial role. Sun is a potential source of background noise. Under certain conditions, background noise may severely impair a WOC link.

The FSO system is gaining rapid popularity for Gbps capable communication link. The research works on WOC system focus to mitigate the atmospheric effects and enhance throughput under various atmospheric conditions. The use of sophisticated forward error correction techniques and aperture averaging are some of the enablers for a robust communication link.

Arka Mukherjee is a post-graduate and gold medallist from IIT Delhi. He has more than eight years of experience in embedded systems design for optical access system

Control System For Quantum Computers Built On An FPGA!