Smart logistics refers to the realisation of system perception, comprehensive analysis and processing in various kinds of logistics, including storage and distribution.

Electronic devices are increasingly being seen in the field of courier industry for packaging, sorting and delivering. Electronics and electromechanical equipment used for delivery services have become indispensable for better service of customers not only in cities but also in remote areas. Service quality of the courier industry is often judged by the state of equipment they have at their service.

Package or parcel delivery is the delivery of shipping containers, parcels or high-volume mail as a single shipment. The service is provided by most postal systems, express mailers, private courier companies and truck-load shipping couriers.

Improved experiments in the postal department

The government of India’s Department of Posts improved its Mail Processing Centre at New Delhi in August 2012 by setting up an automated system that enables processing of up to 55,000 mail pieces (approximately 35,000 letters and 20,000 mixed mail packages) per hour. This automated mail processing system was installed by Siemens. The system consists of a sorting machine with an integrated reading and video coding machine, which reads barcodes or manually-written addresses on letters line-by-line. Based on addresses, the sorting machine automatically sorts the letters and collects them in a specified bin in a single turn.

Multiple optical character readers (OCRs) can read the entire address of an envelope, spray a barcode on it and sort it at the rate of more than nine per second. Wide-area barcode readers can read a barcode virtually anywhere on the letter. The remote barcoding system provides barcoding for handwritten script mails or mails that cannot be read by OCRs.

An electronics system, when added to a customised mailbox, adds several benefits. Simple electronics, such as displays, keyboards, barcode readers and transmitters/receivers, may be added to a mailbox, which can make mail delivery more efficient.

The magic of drones 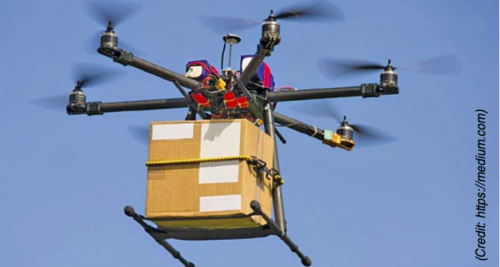 Drone tech for delivering parcels and other types of goods is receiving massive investments from big players all over the globe. With such large companies as Amazon, Walmart, UPS, Google and global postal companies investing in drone delivery projects, it is only a matter of time before wide-scale drone delivery becomes a reality.

However, there are many technical challenges that need to be overcome. There are widespread privacy concerns. Perhaps, drones for delivering parcels will be limited to just far-out and hard-to-reach places.

Germany’s post office was able to beat Amazon and Google in speed with the launch of drone delivery service. France’s La Poste launched a programme to use drones to deliver parcels in all weathers up to about 19km (12 miles) away.

Both Switzerland’s and Finland’s postal services have drone parcel delivery test projects in place. China is moving fast with drone delivery services. Its largest mail carrier, SF Express, is already using drones and delivering 500 parcels per day to remote areas. There are many more mail and courier companies with such active programmes.

Through partnerships with the government of Rwanda, Zipline delivers all blood products for twenty hospitals and healthcare centres using drones, for improving access to healthcare for millions of Rwandans.

Some challenges of using drones in a product delivery system at present are:

Drones can, however, be effectively used where there is little road or rail infrastructure.

Drone delivery system Flirtey conducted its first ship-to-shore drone delivery in the US on New Jersey’s coastal line in June 2016. “Imagine a future where in the event of such natural disasters as Hurricane Sandy, drones can provide life-saving aid to victims of disaster in terms of medical supplies, food and water,” opines Matt Sweeny, chief executive officer, Flirtey.

Parcels are delivered via postal service and/or courier companies to home. Waiting for packages to be delivered, however, could be frustrating. Blockchain having several characteristics such as being centralised, transparent, efficient, cost-effective, secure, etc can solve a number of existing problems for postal services and courier companies. It can identify verification logistics and keep track of mails/parcels.

IBM is exploring blockchain use to accurately track and share information, and even transact between the Internet of Things (IoT) devices. Postal vehicles and sorting equipment could thereby manage their own tracking, monitoring and maintenance.

Databases can do it, too. Blockchain could help all this happen automatically, making systems faster and cheaper.

If each parcel had a small sensor, blockchain could be used to manage the chain of custody between different partners. Tracking parcels on blockchain would also expedite customs clearance, and integrate payments, logistics and shipping into one cohesive platform.

The IoT, AI and robotics are the future of logistics

Nowadays, many different kinds of delivery companies transport different kinds of parcels and offer their own services, which causes a lot of wastage of resources. In addition, volume of parcels in all cities that need to be delivered has grown dramatically. To deal with these problems, a uniform parcel delivery system in a smart city that can offer service to all kinds of customers in the city, including manufacturers, departmental stores, restaurants, individuals and so forth, has been designed. This system uses the IoT, RFID technology, wireless communication and cloud computing. With this system, the whole package delivery process, including classification of packages, vehicle scheduling, path planning, transporting and monitoring, can be managed automatically. As a result, use of both material and manpower resources can be reduced.

Artificial intelligence (AI) has the power to increase efficiency of the supply chain in all areas drastically. Rolls Royce recently partnered with Google to create autonomous ships. This has resulted in replacement of jobs of twenty-plus ship crew members.

In supply chain deliveries, every minute and kilometre matters. UPS, a parcel delivery company, uses an AI-powered GPS tool called ORION (on road integrated optimisation and navigation) to create the most efficient routes for its fleet. Customers, drivers and vehicles submit data to the machine, which then uses algorithms to create the most optimal routes. Instead of being stuck in traffic, ORION helps drivers make their deliveries on time and in the most efficient manner.

Optimising delivery routes has had a great impact on UPS business, from saving time and money to reducing emissions and wear-and-tear of its trucks. With ORION, UPS estimates to have reduced its delivery kilometres by hundred million. Thus, using AI, UPS is saving fifty million dollars per year.

Smart logistics refers to the realisation of system perception, comprehensive analysis and processing in various kinds of logistics, including storage and distribution. Use of the IoT technology can promote intelligent levels of the whole logistics industry.

SaaS parcel shipping solutions used to be only for small shipping, but today, the IoT connects shipping apps to local data sources, scales, thermal label printers and other material-handling devices.

The IoT is supporting the value chain in parcel delivery to create an Internet of parcels. Digitalisation and the IoT are creating new framework conditions. The domestic market of US Postal Service, China Post and Japan Post is big enough. The IoT can provide a sustainable solution for these to support the growing demand of e-commerce for seamless x-border delivery. Today, there is growing demand for x-border e-commerce, B2C delivery.

It is crucial that parcels arrive on time at the destination to satisfy customers. Parcel delivery systems involve many steps, including scanning parcel codes, loading parcels onto vehicles and sending them to the customers’ destination. Today, GPS, Waze, Android tools and other cloud-based systems are intelligently managing delivery processes and delivering parcels on time. Several new technologies are being used as e-commerce and online shopping is exploding.

According to a tech company, delivery robots are being designed to deliver packages, groceries and food to consumers within two-to-three-kilometre radius in under thirty minutes. These drive autonomously while being monitored by human operators in control centres. The robots have already been on the road in European and American cities and have covered more than 8050km (5000 miles), meeting more than 400,000 people without a single accident.

Building a robust courier industry needs long-term planning. Like any other industry that is at a nascent stage, the electronics-based parcel industry in India will also undergo its share of teething problems. This is where a healthy interface between the government and courier companies will ensure that businesses scale rapidly in the country.

Vinayak Ramachandra Adkoli is BE in industrial production. He has been a lecturer in mechanical department for ten years in three different polytechnics. He is also a freelance writer and cartoonist