High-tech gadgets have been speedily replacing or getting rid of the traditional models of many items. However, pen and paper are still retaining their place amid the technological changes that are taking place. For those who still prefer the feel of holding a pen in hand and writing on a paper, smart pens are a great option.

No doubt, the process of taking notes on the paper and then typing them on the computer later, is time-consuming as well as a monotonous task to do. And one has to play the role of multi-tasker—listening, understanding and taking handwritten notes simultaneously, which have high chances of missing out on important things. 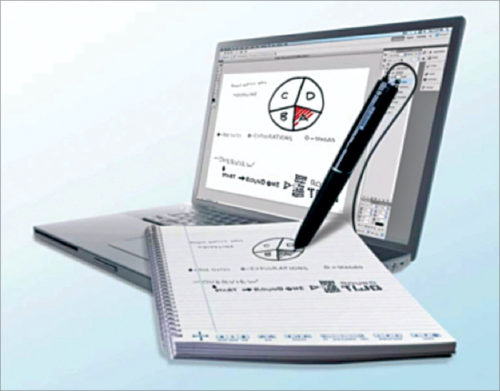 Thanks to smart pens, all these issues of taking notes with a regular pen, is a thing of past now. This piece of tech has brought a significant transformation and changed the dynamics of note-taking. It has made it much easier to take smart, fast and easy notes, and to maintain files in an organised and reliable way. The pen records everything, whatever you write, scribble or draw, not only on the paper, screen, tablet, etc, but even in the air and digitises it by uploading it to your computer/smartphone.

How does it work?

A smart pen is a high-tech writing tool that records natural handwriting notes and stores the data on the memory chip of the pen. It comes with sensors that intelligently capture what you write on the note, stroke by stroke. But it requires a special paper that comes in notebook form. Each sheet has a grid of thousands of microdots that make the page more interactive and engaging. At the bottom of the page, it displays interactive icons where you can choose functions like recording or pausing audio, or placing bookmarks as per your convenience.

When handwritten notes are converted into digital characters, the texts can be changed using the edit option tool. It allows transmitting the user’s handwritten notes or drawings to other devices such as Android or Apple devices, printers, modems, desktop computers, etc, for different applications. Besides, it has features that make it easy to share notes or file transfer via LAN, email, and instant messaging applications. And all the notes and images can be saved safely for future reference.

Some smart pens have interesting features and functionalities like voice recording capabilities and a camera. The audio recorder can be used for recording interviews and lectures, and later you can write them out and upload them. The camera records whatever you write or doodle on the paired notebook and can sync to your smartphone or any device that has the corresponding apps installed. It works with a battery that is rechargeable or in the dual charging system. This battery usually lasts for five to six hours of writing.

Smart pens are equipped with a flashlight at the tip that allows writing in the dark. When the pen is not used and remains idle for some time, it automatically shuts off the light.

Smart pens make the note-taking process easier and less stressful with better management. The notes hastily written and recorded on the road, in a meeting or classroom are stored safely; more than ten pages of notes can be stored on the pen. They eliminate the lengthy task of transcribing the whole lecture. The user can access any part of a recorded lecture/discourse by simply tapping a word, if in case you miss, don’t understand or remember a certain portion of the lecture.

They sport a sleek and slender profile and are light in weight. As a result, they are portable and easy-to-carry anywhere. Not only that, they are comfortable to hold and easy to write with, which makes them very user-friendly.

The software embedded in the microprocessor of the pen enables recognition of handwriting of the user. It also comes handy for signature verification. The user can also train the pen to recognise a particular handwriting style of the user. No matter how messy it is, the pen can identify the user’s handwriting, if it is written in a consistent manner.

One interesting fact about smart pen is that it rejects an intruder’s attempt to break into the device if it fails to recognise the handwriting. Hence, the pen accepts only the owner’s handwriting. It protects your files from loss and unauthorised access.

How does it help people with learning disabilities?

Smart pen is very handy for blind people who struggle to keep up with note writing. It is also useful for students with a specific learning difficulty such as dyslexia or any disability that affects handwriting. Note-taking requires a lot of concentration and effort than reading or learning. It can have a negative impact on the student with disabilities in unexpected ways while trying to balance consistent writing with the time-bound lecture or presentation. When their focus is being split, disabled students often end up not being able to make sense of what they have managed to take notes of.

In such cases, smart pens have proven to be effective as they are designed to make the work of students easier. Since the device records everything and allows writing to be synchronised with audio, it helps in creating a positive learning experience for the students.

Besides, it improves the quality of the notes as well as increases the engagement of the students. With such note-taking support, the students feel a sense of ease and enjoyment of lectures without the fear of missing important information. The device significantly contributes to instilling a new confidence and improving academic performance of the students.

Studies revealed that a smart pen reduces an enormous amount of anxiety among the students in a classroom. Students have developed various ways of taking notes with back up information in the device. They start to write in a single word or keywords to identify each part of the lecture. Later, they use the pen to extract detailed information from the audio recording using the keywords. The findings say that the use of a smart pen has benefitted the students in various aspects. The positive impact on the students is evident from the improved grades. In addition, smart pens have also been able to create a sense of belonging in their academic environment.

Do you want to convert handwritten text from the plain text? Read this article.