An evolution began when automobile industry joined their hands with semiconductor industry to create intelligent, reliable, comfortable and safer vehicles. Today’s automobile contains dozens of computer chips, monitoring and controlling everything from ride handling to onboard entertainment and communication systems. Here, we are focussing only on “Drive-by-wire systems” used in automobiles.

By-wire systems began to be installed about twenty-five years ago; first in the military, and later in commercial aircraft and now in the ground transportation sector. Traditional vehicles use cables, hydraulic pressure and other ways of providing a driver with direct, physical control over the speed or direction of a vehicle, whereas drive-by-wire technology uses electronic controls to activate the brakes, control the steering and operate other systems.

Here each component is linked to the various systems via a central data bus. As a result, automobile manufacturers gain entirely new dimension in active safety control through a continuous exchange of information. For example, should a car swerve in a bend and lose control? This information is passed on almost instantaneously via the data bus to the stability- controller, which is then activated. When this system is installed, and each component fitted with suitable controller chip, sudden steering problems caused by a mechanical fault between the steering and the front axle can be avoided. 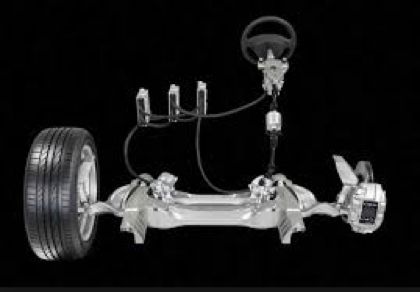 Throttle-by-wire system replaces the mechanical cable connecting the gas pedal and throttle valve(s)with the electronic system. It uses series of sensors and actuators. A sensor measures the position of the accelerator pedal to determine the driver’s intentions. It then sends a signal to the engine management electronic control unit (ECU), which in turn sends a signal to an actuator that appropriately sets the fuel injection system (which has replaced the carburettor). In vehicle that uses true electronic throttle control (ETC), there is no physical connection between the gas pedal and the throttle. Instead, the gas pedal sends a signal that causes an electromechanical actuator to open the throttle. Throttle thus controlled electronically perform more efficient operation. Also, they enhance safety systems such as a traction control system (TCS) or electronic stability program (ESP).

Similarly, in Steer-by-wire system, the steering column is replaced with control units linked by a fault-tolerant network. This system has a position sensor at the steering wheel or joystick which provides input to the steering ECU. The ECU controls an electric motor that sets the position of the front wheels. Also, electric power steering(EPS) system is an enabling technology for steer-by-wire as electric motors are easy for ECUs to control. Steer-by-wire system enhance safety, increase fuel economy, provide varying levels of “road feel”, and allow car designers more flexibility.

Brake-by-wire system also uses electrical connections to connect the four braking “corners” to the pedal and to each other. There are no hydraulic components. In place of callipers and wheel cylinders actuated by hydraulic brake fluid pressure, electronic brake actuators are used. These are controlled by an ECU that gets input from a brake pedal sensor.

Electrically actuated brakes are particularly suited for use with technologies such as anti-lock braking system (ABS) and stability control because electric actuators can be controlled very precisely by the brake system ECU. This system provides better control of pedal stiffness, traction control, vehicle stability and brake force distribution.

Now, let’s have a look at Electronic Control Unit(ECU). Initially, ECUs were used for engine control purpose. They have become a standard device on most cars since the late 1970’s when they became necessary due to increasingly stringent emission standards.

The ECU uses closed-loop control, a control scheme that monitors outputs of a system to control the inputs to a system, managing the emissions and fuel economy of the engine (as well as a host of other parameters). Gathering data from dozens of different sensors, the ECU knows everything from the coolant temperature to the amount of oxygen in the exhaust.

With this data, the ECU performs millions of calculations each second, including looking up values in tables, calculating the results of long equations to decide on the best spark timing and determining how long the fuel injector is open. The ECU does all of this to ensure the lowest emissions and best mileage.

Next let’s come to networking standards for by wire systems. Out of available networking standards, FlexRay is a promising networking standard for present and next many years to come. It serves as the next step beyond CAN and LIN, enabling the vehicle management of many more safety and comfort features. It delivers the speed and reliability required for next generation in car control systems.