So researchers are pioneering a technology called ‘low-temperature electronics’ or ‘cryoelectronics’. Cryoelectronic materials with high carrier mobility and reliability might provide a better solution for circuits to be used in low temperatures.

In military and scientific aircrafts, many sensors such as X-ray detectors are used for astronomical observation or surveillance. These must operate at a low temperature. Cosmic background explorer, infrared telescope in space and infrared space observatory are some of the devices which make use of cryoelectronics-based electronic components.

Cryoelectronics with superconductors
Superconductivity is a state of matter. The thermal, electric and magnetic properties of many chemical elements, compounds and alloys become strikingly different when cooled to exceedingly low temperatures. These become superconductors at such temperatures.

Superconductivity was discovered in 1911 by Dutch physicist Heike Kamerlingh Onnes, who was awarded Nobel Prize in 1913 for his low temperature research.

The best superconductors today are alloys or compounds. Examples include disilver fluoride or silver subfluoride (Ag2F) and compound of carbon and potassium (C8K). Some semiconducting compounds, such as tin telluride (SnTe), can become superconducting if properly infused with impurities.

Transition temperature and critical magnetic field of some superconducting elements are shown in the table. 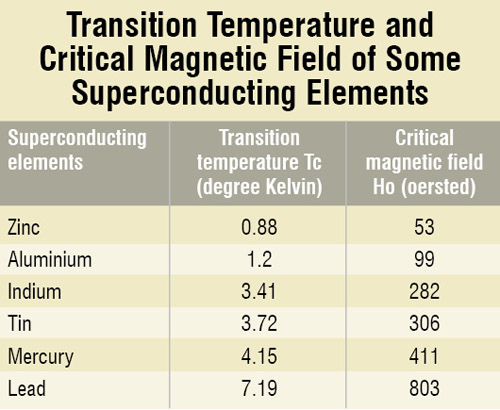 NASA is using components such as semiconductor switching devices, magnetic capacitors, digital-to-analogue and analogue-to-digital converters, DC-AC converters, operational amplifiers, oscillators, and power conversion and conditioning circuits based on cryoelectronics. Cryoelectronics is also used in the driver circuitry of motors or actuators. Commercial high-speed pulse-width-modulation (PMW) chips have been characterised in terms of their performance in the range of 25°C to -196°C. Silicon-on-insulator can be used to make MOS devices with gates as small as 40 nm. 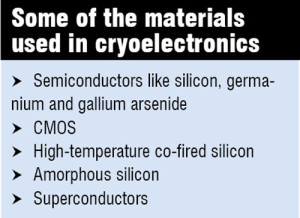 One can imagine a future where heat-source-free cryoelectronics technologies can be tapped for sensors and other electronic components of satellites, ultra-low-temperature freezers, cryogenic surgical instruments and computers.

Read other Aerospace and Defence articles.

A BE in industrial production, the author is a lecturer, freelance writer, cartoonist as well as story writer