Nikola Tesla in the late-18th and early-19th centuries described a device that he believed could transmit electrical power from one conductor to another without the need for wires. But his work in this field failed due to engineering and financial limitations. Soon thereafter power cables became the commonly-accepted means of transporting electricity across distances. But with widespread adoption of small, portable devices with batteries in need of constant recharging, people’s attention is again turning to wireless power. Let us read more about wireless charging technology

Power through radio waves. Transmitting power through radio waves at first seemed promising. A good example of how radio waves can transmit power is a crystal radio. This basic radio consists of a long wire as an antenna, a diode, another wire to act as ground wire and a crystal earphone. By attaching the two wires to either end of the diode, connecting the ground wire to a metal stake in the ground and connecting the crystal earphone to the ends of the diode, this radio can pick up radio waves that we can actually hear. We do not need a battery or any other power source to hear these; radio waves themselves provide the power.

The trouble with radio wave transmissions is that these are not very efficient. These spread out as these transmit; only a relatively-small percentage would make it to the antenna for the charging device.

But there are other methods to send electricity wirelessly, including through microwaves or magnetism. Magnet approach really resonated with engineers looking for a way to get rid of those extra charging cords.

There are mainly two types of wireless charging: inductive and conductive. Inductive charging involves an electromagnetic field to transfer charge across a gap and into the device’s battery. Requisite for inductive charging is an induction coil, which is capable of receiving wireless energy. Conductive charging functions through direct electrical contact between the power source and the battery.

Wireless charging or inductive charging uses an electromagnetic field to transfer energy between two objects. This is usually done with a charging station. Energy is sent through an inductive coupling to an electrical device, which can then use that energy to charge batteries or run the device. 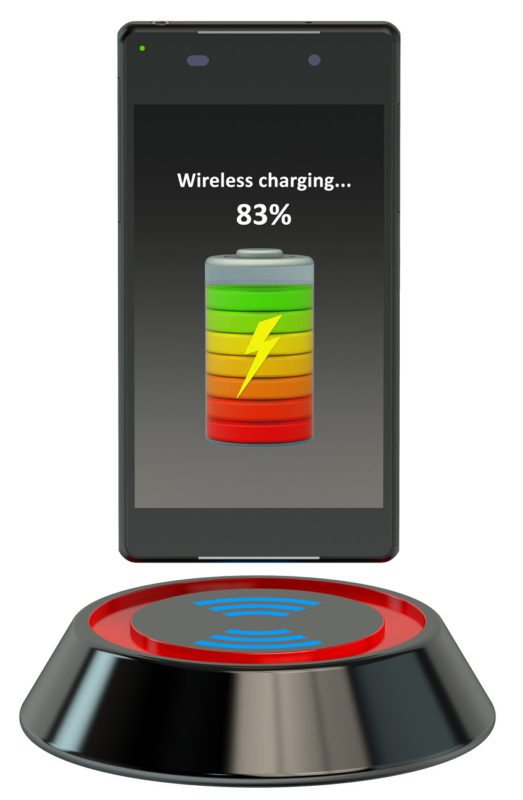 Greater distances between sender and receiver coils can be achieved when the inductive charging system uses resonant inductive coupling. Recent improvements to the resonant system include using a movable transmission coil, for example, mounted on an elevated platform or arm, and the use of silver-plated copper or sometimes aluminium for the receiver coil to minimize weight and decrease resistance due to skin effect.

Through this process, power can be transferred safely over an air gap and also through any non-metallic object that might exist between the coils, such as wood, plastic or granite.

Addition of extra (or larger) transmitter coils can also extend the range at which power can be transferred. Wireless charging is based on the principle of magnetic resonance or inductive power transfer, the process whereby electricity is transferred between two objects through coils using the following key steps:
1. Mains voltage is converted into high-frequency AC.

3. The AC flowing within the transmitter coil induces a magnetic field that extends to the receiver coil (when within a specified distance).

4. The magnetic field generates current within the receiver coil of the device. The process whereby energy is transmitted between the transmitter and the receiver coil is also referred to as magnetic or resonant coupling, and is achieved by both the coils resonating at the same frequency.

5. The AC current flowing within the receiver coil is converted into DC by the receiver circuit, which can then be used to charge the battery.

Miniaturized receivers are integrated directly into the devices, removing the need for external housing covers or sleeves on devices. With continued advances in wireless charging technology, transmitters built into workstations, desks, tables and a whole range of everyday furniture will soon become a reality.

Wireless charging for wearables and devices using AA batteries. In order to truly deliver wireless charging for all consumer electronic devices, technology needed to somehow enable charging of irregular shaped objects, that is, not only thin form or flat in shape. Such devices commonly use AA batteries or specialised small batteries in the case of wearable devices. This is called in-device charging and it means convenient, simultaneous charging of multiple devices including remote controllers, gaming devices, cameras, toys, wearable devices and more, without having to remove and replace batteries.

Companies are developing a technology that could draw enough power from ambient radio waves to keep a mobile phone handset topped up. Ambient electromagnetic radiation—emitted from Wi-Fi transmitters, mobile phone antennae, TV masts and other sources—could be converted into enough electrical current to keep a battery topped up. They are working towards a prototype that could harvest up to 50 milliwatts of power—enough to slowly recharge a phone that is switched off. Current prototypes can harvest three to five milliwatts.

Researchers have created a revolutionary device that could remotely charge batteries and power household appliances. They have shown that it is possible to wirelessly power a 60-watt lightbulb sitting about two metres away from a power source. They have demonstrated, for the first time, that it is feasible to efficiently send that much power over such distance. The experiment paves the way for wirelessly charging batteries in laptops, mobile phones and music players, as well as disposing of electric cords on household appliances.

A Membrane Can Revolutionise Flexible Electronics

JOB: Engineer At Eaton In Pune