If successful, space-based solar systems can be sustainable and inexhaustible long-term solutions for meeting power requirements for the entire world.

Solar panel arrays have been used to power space stations and satellites for a long time now, but the concept of harnessing solar power from outer space is still at a nascent stage. On Earth, solar arrays are used for power generation during daytime in places with enough sunlight. Many places like Russia do not receive enough sunlight all year round. Besides, a huge portion of solar energy reaching the planet is lost due to reflection and absorption by dust and other particles in the atmosphere.

Solar energy has to be stored in batteries at present as a backup for harsh weather and night-time. If successful, space-based solar systems can be sustainable and inexhaustible long-term solutions for meeting power requirements for the entire world. 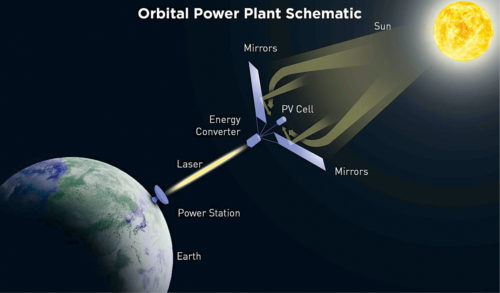 Compared to terrestrial solar farms, these systems can receive permanent sunlight 24/7 and capture sun rays without any hindrance, providing huge output capacity. This power generated at a continuous pace can then be instantly transmitted anywhere across the world, such as in remote areas for military, decreasing the dependence on batteries.

This fascinating idea was attempted in the 1970s, but several barriers made it infeasible to pursue it further. Even today, the most daunting challenge is the cost incurred with no assurance of returns. Solar-powered satellites require a large array of solar panels, which also means higher mass.

Materials used in manufacturing have a short lifetime in space due to stringent conditions, and large amounts of materials requiring quick replacement is a big hassle. The solution is to make them lightweight without decreasing efficiency.

Despite the challenges, Indian Space Research Organisation (ISRO) has partnered with US National Space Society and with China for development of solar collectors and solar satellites. In 2015, Japanese Aerospace Exploration Agency (JAXA) successfully transmitted 1.8 kilowatts of energy using microwaves across a distance of 55 metres to a receiving antenna. The agency has been researching on overcoming technological challenges like those associated with wireless power transmissions.

In February 2019, China Association for Science and Technology (CAST) announced its plans of building power satellites. The vision of various countries is to build a commercial-scale solar power station in space in the next few decades.

Many designs for capture and transmission of solar energy have been proposed by researchers. Most of them focus on utilising optical reflectors for concentration and ultra-lightweight but efficient photovoltaic arrays that can be easily maintained and repaired for energy collection and conversion to electricity.

For construction, using lunar materials, for example, could be a convenient option in space. The completed array would orbit above Earth and beam energy back to ground-based receivers. Effective transmission is possible only with efficient wireless systems. Laser beaming and microwave power transmission are typical preferences due to lower weight, cost as well as high efficiency.

For the orbit, choosing geosynchronous orbit (GEO) offers multiple advantages including extensibility and almost constant power transmission, but the tough part is dealing with radiation exposure. On Earth, energy can be received by rectenna, a rectifying antenna used in wireless systems that transmit power by radio waves.

Thanks to companies like SpaceX and Blue Origin, cost of space launch and hardware are slowly decreasing. Developments in modular manufacturing and robotics are enabling mass production of small modular systems that bring down satellite costs.

In 2018, scientists from California Institute of Technology created a tile weighing just 1.5 kilograms per square-metre, which could be integrated to form large solar arrays for harnessing solar energy.

While attempting it, risks posed to the planet, including living organisms, need to be taken into consideration. Safety protocols such as for transmission power levels of microwaves need to be followed by nations. Since the spectrum that transmits RF waves is already congested, band allocation and geopolitical challenges may arise. Beaming a large amount of power can lead to increased surface temperature. Other space hazards such as solar flares also need to be taken into account.

There is still a long way to go but if appropriate time and resources are available, space-based solar power can offer innumerous benefits for mankind.