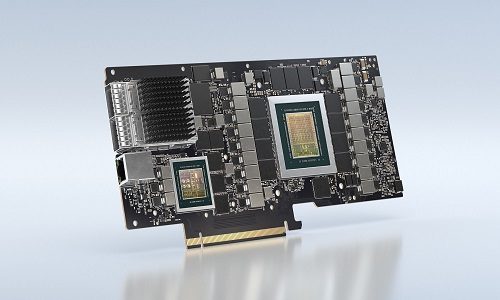 NVIDIA has launched a new kind of processor known as Data Processing Units (DPUs) that are supported by DOCA, a novel data-centre-infrastructure-on-a-chip architecture that enables breakthrough networking, storage and security performance.

Optimised to offload critical networking, storage and security tasks from CPUs, BlueField-2 DPUs enables organisations to transform their IT infrastructure into state-of-the-art data centres that are accelerated, fully programmable and armed with “zero-trust” security features to prevent data breaches and cyberattacks.

The power of CPU and GPU have been key to artificial intelligence, deep learning and big data analytics applications till now.

However, over the past decade, computing has broken out of the confines of PC and servers with CPUs and GPUs powering new hyperscale data centres. These data centres are knit together with a powerful new category of processors. The DPU, or data processing unit, has become the third member of the data-centric accelerated computing model.

While the CPU is for general-purpose computing, the GPU is for accelerated computing and the DPU, which moves data around the data centre, does data processing.

A DPU is a system on a chip (SOC) that combines:

All these DPU capabilities are critical to enabling an isolated, bare-metal, cloud-native computing that will define the next generation of cloud-scale computing.

A single BlueField-2 DPU can deliver the same data centre services that could consume up to 125 CPU cores. This frees up valuable CPU cores to run a wide range of enterprise applications.

“The data centre has become the new unit of computing,” said Jensen Huang, founder and CEO of NVIDIA. “DPUs are an essential element of modern and secure accelerated data centres in which CPUs, GPUs and DPUs are able to combine into a single computing unit that’s fully programmable, AI-enabled and can deliver levels of security and compute power not previously possible.”

BlueField-2 DPUs are sampling now and expected to be featured in new systems from leading server manufacturers in 2021. BlueField-2X DPUs are under development and are also expected to become available in 2021.