Until now, Arduino has been the board of choice for making low-cost IoT projects. Now, a soon-to-be-launched dev board called Frame.IoT (that is compatible with Arduino IDE) aims to offer the same functionalities along with providing interchangeable components, which can be easily used when required.

Presenting the Frame.IoT, an Arduino-compatible developer board that promises to be a new way of developing IoT projects, such as a Bluetooth-based mobile app for controlling a robotic car, a smart plant water level sensor, a real-time Bitcoin or stock ticker with LED indications, or a weather detector.

The ESP32-based development board has in-built support for Wi-Fi and Bluetooth Low Energy (BLE) and can be operated using a rechargeable Lithium-Ion/Polymer battery. The board has 16 RGB LEDs that are arranged in a circular pattern. The kit also has external actuators and sensors and features a microSD card slot, a USB to serial converter, a micro USB port and a digital audio amp.

Most of the time, project designers don’t feel the need to use every in-built component that is on a development board. And since they can’t remove it, it ends up taking unnecessary space in a prototype. But since each component in Frame.IoT is connected via jumper pins, it is easy to remove the unrequired ones and connect the corresponding I/O pins with those that will be required to function.

Rather than sourcing each component separately, the built-in components on the board provide affordability for usage. Besides that, the board also facilitates in quickly building your IoT projects and do troubleshooting with ease.

Using the available Arduino libraries, such as NeoPixelBus and ESP8266 Audio, the 16 addressable RGB LEDs were made operable and a live radio station was created respectively.

The Frame.IoT developer board is environment-friendly. With a modular design, one can take advantage of the required components without wasting the ones that aren’t

As of now, the open-source project is seeking crowdfunding. Upon generating enough funds, the boards will be released to a wider audience.

More details about the current status of the project can be found here. 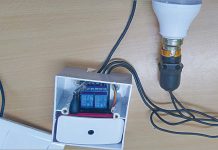