Children and pets left behind in cars are susceptible to facing life-threatening conditions due to the rise in-cabin temperature because of closed windows. With summer at its peak, the temperature in many countries near the equator reaches its peak. While cars remain cool while being driven, the parked cars under the sun might reach temperatures as high as 70°C inside parked vehicles. 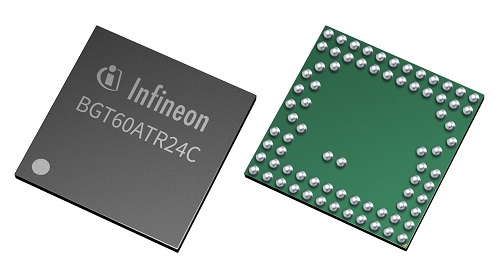 To resolve the above problem, Infineon Technologies have announced the launch of the XENSIV 60 GHz automotive radar sensor, an In-cabin radar system (ICMS) that is capable of detecting micro-movements as well as vital signs of left-behind infants and animals and sounding the alarm. Moreover, the compact and cost-effective chipset can be used for other applications such as distance measurement by high-resolution frequency modulated continuous wave (FMCW) radars, front-end radar for gesture sensing, short-range sensing operations, as well as hidden sensing applications in the radome.

According to the company, the ultra-compact BGT60ATR24C enables 4 GHz ultra-wide bandwidth FMCW operation. For the data collection and configuration of the sensors, a digital interface is used. To achieve the lowest power consumption, the power mode optimization is used for the independent data accusation in the integrated state machine. The chip contains two transmitter channels (TX) and 4 receiver channels (RX). The small size and low powered solution offer excellent thermal management.

The company also claims that the product can be used for additional functionality such as seat belt reminder that adds to the safety of the passenger in the car. The sensor is AEC-Q100/101 qualified which makes it suitable for automotive applications.