Adlink has released an AIOT SMARC module powered by a MediaTek Genio 1200 processor. The SMARC 2.1 is capable of driving AI at the edge. The module is powered by an octa-core CPU with Penta-core GPU for advanced 3D graphics and an integrated APU( AI processor Unit) for on-device AI processing, such as deep learning, neural network (NN) acceleration, and computer vision. The module can support up to 3 MIPI camera inputs and extended IO connectivity. 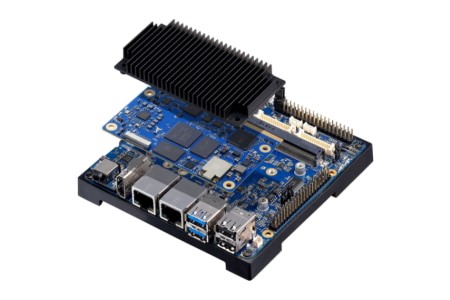 “With a powerful 8-core CPU and integrating GPU plus APU, the module showcases a computing prowess previously only seen in x86 platforms, and at half the power envelope,” said Henri Parmentier, Senior Product Manager, ADLINK. “It enables our clients to bring advanced intelligent systems that can not only handle extreme workloads but also reduce energy costs and leverage for an improved carbon footprint.”

The module is suitable for industrial AIoT applications and can be used to build powerful robots for use in harsh industrial conditions and in temperatures that range from -40° to 85°C. The AIoT SMARC module is powered by MediaTek’s 8-core MT8395 CPU which features 4 power cores of Arm Cortex-A78 and 4 cores of ARM Cortex-A55. It is capable of handling up to 8GB of LPDDR4 RAM. The module has 1 onboard UFS, up to 256 GBs and features 3x MIPI CSI interfaces. The company claims that the product will be made available for at least a decade.

“MediaTek’s Genio AIoT platform was designed to play a key role in helping drive the next generation of innovation at the edge,” said Richard Lu, Vice President of MediaTek’s AIoT Business Unit. “We look forward to seeing the many new user experiences that are brought to life through ADLINK’s latest Genio 1200-powered SMARC module.”

The Genio-powered module features high-performance AI and graphics-centric capabilities and is specially designed for use in various AIoT use cases at the edge. The module can be used for applications such as the advanced smart home system, human-machine interface (HMI), 4K multimedia applications, robotics, etc.