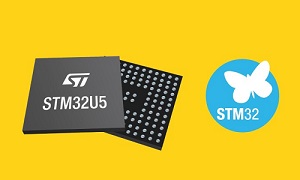 The new STM32U5 series combines the efficient Arm Cortex-M33 core with an on-chip IP having power-saving features, cutting down energy demand while pumping up performance. The microcontrollers introduce an innovative autonomous mode that lets direct memory access (DMA) and peripherals keep working while most of the device sleeps, to save power. Granular control over operating modes allows part of the MCU’s memory to be turned off, to avoid powering unused cells.

Other features of these ultra-low-power MCUs are:

In addition to saving power, designers can tackle demanding applications by leveraging new features such as greater Flash density, now with up to 2MB on-chip and fast interfaces to off-chip memory for further expansion. Up to 0.5MB of on-chip Flash has increased cycle life, up to 100,000 read/write cycles to assure reliable storage of user data.

Building on the cybersecurity focus of the STM32L5, which includes a Cortex-M33 core with Arm TrustZone technology and an ST-specific security feature set, the STM32U5 series introduces new and state-of-the-art innovations:

Azure RTOS will be integrated into the STM32Cube software suite, with configuration features in STM32CubeMX and STM32CubeIDE tools an examples, bringing additional key benefits to STM32Cube like fast performance and industry certifications.

The STM32U5 IoT Discovery Kit (B-U585I-IOT02A) combines the MCU with Wi-Fi and Bluetooth modules, as well as microphones, temperature and humidity, magnetometer, accelerometer and gyroscope, pressure, Time-of-Flight and gesture-detection sensors. It enables a wide diversity of applications by exploiting low-power communication, multiway sensing and direct connection to cloud servers. It includes

STM32U5 MCUs from STMicroelectronics is sampling now in a broad choice of packages including a 4.2mm x 3.95mm WLCSP and 7mm x 7mm UQFN48 and UFBGA169 to lead customers and will be in full production in September 2021. The STM32U5 IoT Discovery Kit will be available to order later in the year.