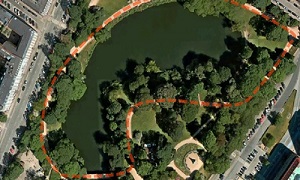 Although the usage of smartphones are a bit beneficial for visually impaired people when they have to walk to new places, the devices can produce significant position errors of more than 10 metres, forcing visually impaired people to rely on others for accurate navigation. And even with professional assistance, most visually impaired people can typically only walk to five places on their own. Moreover, the conventional way of learning how to navigate a route as a visually impaired person requires many hours of one-on-one training with a mobility instructor and extensive planning. The World Health Organisation (WHO) estimates that approximately 285 million people globally live with blindness or visual impairment, making such training for everyone with low vision to be extremely cost-intensive.

The u-blox ZED-F9P uses GNSS signals from all four GNSS constellations (GPS, GLONASS, Galileo and BeiDou) with integrated multi-band real-time kinematic (RTK) technology to achieve centimetre-level accuracy within seconds – even in challenging environments such as in cities. The u-blox ZED-F9P is also cost-efficient, compact and has low power consumption. Leveraging these features, the NaviBlind GPS device connects to the NaviBlind app via Bluetooth to deliver the essential positioning data that allows visually impaired people to access the outdoor world independently via voice navigation. The app also helps the user stay within the bounds of sidewalks and pedestrian crossings to avoid potential dangers such as walking onto car lanes. These features require a very accurate location service that smartphones’ internal location systems can’t possibly deliver.

“I clearly remember the first time I tested the u-blox ZED-F9P with the NaviBlind app. I had this yes feeling that we’d finally found a precise enough GPS to realise our business idea,” said Jonathan Sonne Andersen, co-founder and CEO NaviBlind. “The u-blox F9 technology aligns perfectly with our business model based on innovating how blind and visually impaired people can remain safe and independent while walking wherever they choose.”

NaviBlind estimates approximately 25 million people worldwide would benefit from using the service now rolling out in Denmark and later across Europe in 2022. By working initially with municipalities and healthcare organisations in Denmark, NaviBlind intends to start empowering blind and visually impaired people so they can remain safe and independent while walking.