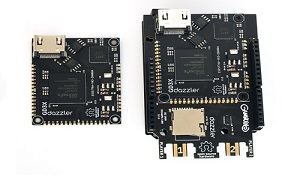 Following the success of the original Gameduino, Excamera Labs has now announced its successor, the Gameduino 3X Dazzler. This Arduino-compatible shield features a Bridgetek BT815 embedded video engine (EVE) graphics controller with 32-bit internal colour precision. Running at speeds reaching 1.1Gps, it takes care of all the graphics processing activities and can support up to 2000 sprites.

Alongside the EVE IC is a Xilinx Spartan-6 FPGA (with 8MBytes of embedded flash), a 24-bit HDMI video interface, plus JTAG, SPI and UART I/Os. There is accommodation for a microSD memory card (with a 16GByte card supplied on certain package options) and a pair of Wii Classic controller ports (provided for some packages).

Thanks to the BT815, the new Gameduino can deliver 1280 x 720-pixel high-definition graphical content, as well as 48KHz stereo audio, to a large format display or TV screen, leading to a much more immersive and enjoyable gaming experience. It also enables high-definition video playback at 30fps frame rates.

Gameduino is suitable for the development of compelling games and various other multimedia projects, via C+. Alternatively, the CircuitPython open source programming language can be used. It has the capacity to deal with both 2D gaming projects and sophisticated 3D renderings.

An array of project examples and helpful demos are available online to get aspiring game developers started. In addition to the Arduino-compatible shield, the new Gameduino can be offered as a streamlined core module too. This still has the graphic controller, programmable logic and HDMI capabilities, but allows easy integration into existing hardware.