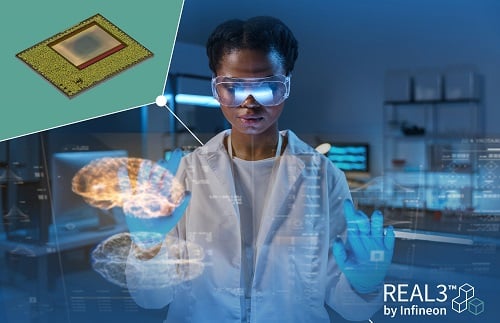 Infineon Technologies has joined hands with pmdtechnologies, a company specialising in 3D Time-of-Flight technologies to design the IRS2975C image sensor. The IRS2975C is the industry’s first sensor to utilize Infineon’s pixel technology, the sensor works on the principle of indirect ToF (i-ToF) to detect depth. The sensor comes in a small size and is suitable for various iToF applications, delivering the highest possible operating range at an optimal power budget. The IRS2975C image sensor is suitable for use in various applications including smartphones, service robots, drones along with various IoT devices.

The IRS2975C features the company’s latest pixel technology which offers the best demodulation efficiency due to its advanced 3D field engineering. The module also integrates the IRS9102C VCSEL driver thus reducing component count and total cost in the bill, therefore, reducing the cost and time of product development.

According to the company, the iToF sensor features a buried optical reflector that elevates quantum efficiency (QE) to a level so far only reached by back-side illumination (BSI) sensors, while maintaining the cost advantage of front-side illumination (FSI) sensors. The IRS2975C also features a half-quarter video graphics array (HQVGA) resolution of 240 x 180 pixels. The sensor comes in a compact measuring just 18 mm x 18mm and offers high sensitivity of 10 µm pixels with SBI and enables highly integrated systems with low-power operation.