They assist in displaying better information, come with a wide variety of security features and can operate in harsh environmental conditions 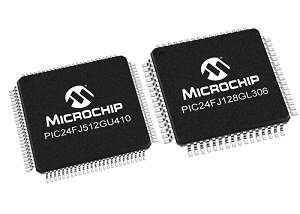 System developers of battery-powered and other power-conscious designs with and without LCDs can now easily add an array of innovative features using a new line of PIC eXtreme Low Power (XLP) microcontrollers (MCUs) from Microchip Technology.

Packed with 14 types of Core Independent Peripherals (CIPs) that operate outside the Central Processing Unit (CPU) for power savings, the PIC24F GU and GL families of MCUs feature the CIP called LCD with Autonomous Animation.

Capable of operating in harsh environments, the MCU families are ideal for automotive, industrial and consumer applications.

Most display applications nowadays involve a few animations like periodically alternating between displays and blinking of pixels to indicate operation. By using an integrated LCD driver with autonomous animation, developers can offload most of these simple animation routines from the CPU, allowing animation even in idle or sleep modes to save power. To assist in quickly designing such display interfaces, the new MCUs come with MPLAB Code Configurator (MCC) support. This graphical programming environment helps LCD designer eliminate the time-consuming task of mapping the pins and segments.

The new MCU families are also designed to make it easy to increase the security of an application, whether it is connected to the Internet or a standalone system. Microchip’s CodeGuard security Flash protection enables segmenting memory into boot and general segments to implement memory access restrictions. The Flash memory is configurable as One Time Programmable (OTP) via Microchip’s In-Circuit Serial Programming (ICSP) write inhibit feature that disables any further modification of the Flash through external programmers/debuggers.

Together with these features, security can be further enhanced using Microchip’s CryptoAuthentication devices as a companion chip to add secure over-the-air updates and pre-provisioned cloud services. Lastly, the MCUs are supported by CryptoAuthLib, 16-bit bootloader, USB and many application libraries in MCC to significantly reduce development time and complexities.

The integrated hardware safety features of the PIC24F GU and GL families enable reliable operation in harsh environments through:

The MCUs feature an extended operating temperature of up to 125 degrees Celsius, are automotive AEC Q100 Grade 1 qualified and have a diagnostic library for IEC 60730 (household appliances) Class B safety standards.