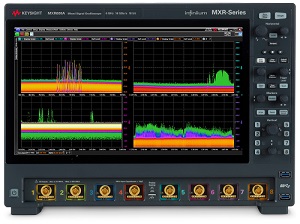 With the growth of the wireless, automotive, aerospace/defence and IoT industries over the past few years, the challenges they brought subsequently increased. This called for having secure testing solutions to tackle the problems. Thus, a range of oscilloscopes such as the UXR-series, S-series, V-series and the Z-series having a range of bandwidths were launched by the test and measurement company, Keysight Technologies.

Moreover, the rapidly growing demand for faster data has introduced increased complexity in high-speed digital designs. To actively perform advanced troubleshooting of power integrity, WiFi6, IoT, and GaN semiconductors that use frequencies between 2 and 6 GHz, testing equipment was required which can perform complex signal interactions across 8 simultaneous channels at 2 – 6 GHz.

This has led the company to introduce a new and enhanced family of oscilloscopes: the MXR-series. It has up to 6 GHz of bandwidth and 16 GSa/s across 8 channels. The MXR-series is an upgrade from previous versions in terms of ADC resolution. It also includes 8 powerful instruments into one: real-time spectrum analyser (RTSA), oscilloscope, digital voltmeter (DVM), waveform generator, Bode plotter, counter, protocol analyser and logic analyser.

“They are using some of the advanced technologies including the A-D Converters, memory processing chips to hardware that implements real-time spectrum analysis. The inclusion of technologies used in the UXR into the 8-in-1 oscilloscope provides incredible ease of use. In addition, they have features all of their own such as analysis software, compliance test software and serial data software. This product is our latest example of solution and technology leadership,” said Jay Alexander, chief technology officer at Keysight Technologies.

The MXR series is equipped with Fault Hunter software, which automatically detects and captures signal issues with just two clicks, comparing them over time. This results in rapid problem resolution for troubleshooting irregular, random or spurious signals. The Pathwave Infiniium Offline software allows remote access to the oscilloscope, enabling engineers to do extensive analysis and data manipulation of measurements from anywhere.

Features of the built-in tools

The integration of the above testing capabilities into single equipment offers easy accessibility and convenience. But can it replace the performance of standalone equipment?

“They can but it depends on the kind of performance you are looking at,” said Erik Babbe, marketing initiative manager at Keysight Technologies. “Each of them has dedicated specs. In 90 per cent of cases, they are sufficient to do the measurements that you want.”

The series is offered in six models ranging from 500 MHz to 6 GHz with both 4 channels and 8 channels.

“The Infiniium MXR series helps engineers to demodulate, analyse and perform advanced analysis on complex signals for reliable measurements. This also enables them to save more time by finding solutions in minutes instead of hours,” said Erik Babbe.