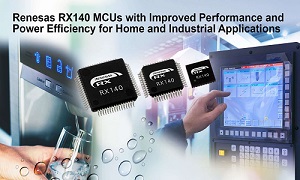 The ultra-low power, 32-bit RX140 group of microcontrollers (MCUs) by Renesas Electronics is the latest addition to its entry-level RX100 Series. Built around the powerful RXv2 CPU core, the RX140 MCUs operate up to 48 MHz with a CoreMark score of 204, equivalent to approximately twice the processing performance of the RX130 group. The RX140 MCUs also boost power efficiency by over 30 per cent compared with previous RX130 MCUs, achieving power consumption as low as 56 µA/MHz when the CPU is in active mode and as low as 0.25 µA in standby mode. This enables the RX140 MCUs to realise high performance and low power consumption in a wide range of products, such as home appliances, industrial and building automation (BA).

The latest capacitive touch sensing units in the RX140 MCUs offer an enhanced user experience (UX) and user interface (UI). The MCUs are less susceptible to electromagnetic noise, thanks to compliance with IEC EN61000-4-3 level 4 (radiated) and EN61000-4-6 level 3 (conducted) capacitive touch noise tolerance requirements, which allows them to detect changes in water level by directly measuring changes in capacitance through high-precision sensing.

Built-in multi-scan functionality and automated sensing improve sensitivity through simultaneous measurement using multiple electrodes, allowing automatic touch detection even in standby mode and simplifying the development of touchless or proximity sensing interfaces. The RX140 MCUs allow the development of reliable, high-end capacitive touch systems for applications in a variety of environments, including home appliances such as microwave ovens, refrigerators and induction heat cooking stoves, as well as manufacturing equipment, building control panels and devices that can detect remaining quantities of water or powder on surfaces.

The RX140 MCUs also feature improved peripheral functions. For example, the increased number of I/O ports enables control of more sensors or external components, and CAN communication support for real-time operation has been added. A built-in AES encryption accelerator and true random number generator (TRNG) reduce the risks of security threats such as data leakage or manipulation.

Designed for scalability, the new RX140 MCUs also maintain pin compatibility with the RX130, allowing customers to upgrade while continuing to make use of existing design resources.

Renesas has created a solution for a complete Waterproof Shower Controller with RX140 MCUs and other complementary analogue and power devices from Renesas portfolio, which can be used to provide sophisticated user interface functionality with an easy-to-use and stylish design. The solution is part of Renesas’ “Winning Combinations” – comprehensive solutions that combine complementary Analogue + Power + Embedded Processing product portfolios. These engineering vetted solutions are engineered to help customers accelerate their designs and get to market faster.

The RX140 group of MCUs is available now in 32- to 64-pin packages with 64KB of flash memory. Mass production for additional configurations and memory sizes over 128KB will be available starting in February 2022. Renesas also introduced the target board for RX140, which provides access to all signal pins, for initial evaluation work. The board is equipped with a Pmod connector for easy connection of sensor modules. To simplify the evaluation of capacitive touch applications even further, Renesas plans to introduce the Capacitive Touch Evaluation System for RX140, which will be similar to the already available Capacitive Touch Evaluation System for RX130. Customers can use the new MCUs with the e2 studio integrated development environment, the Smart Configurator code generation support tool and the QE for Capacitive Touch support tool to shorten development time, reduce the total cost, and improve software quality.

“The RX100 Series of ultra-low power MCUs is gaining popularity for the superior scalability it offers as the entry-level model for the RX Family,” said Sakae Ito, Vice President of the IoT Platform Business Division at Renesas. “With the release of the RX140 MCUs offering improved performance and power efficiency alongside the latest capacitive touch IP, we continue to bring advanced solutions that enable customers to create products that combine enhanced functionality, design, and usability.”