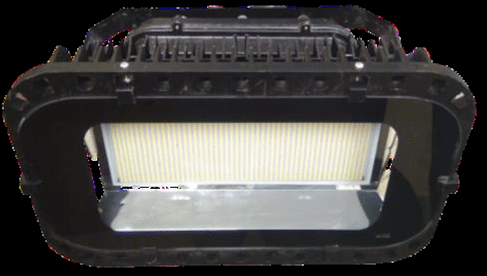 BINAY has released I-FOGSENSE, which is an intelligent antifog floodlight. The I-FOGSENSE antifog PowerLed flood light fixtures can automatically sense and adjust the colour temperature and intensity of the light based on the fog. These PowerLED lights use reliable high efficacy LEDs which offer system efficacies of up to 165 to 180 lm/Watt. The intelligent fog light can offer an energy efficiency of more than 70% over conventional lighting when LEDs are coupled with energy-saving controls. The I FOGSENSE employs a PLCDC Nanogrid Technology that greatly reduces the risk of fire as it works at 48V PLCDC which has lower sparking potential.

Fog can create safety issues in various applications such as in mines, airports, seaports etc. Overcoming the visibility problems during fog is either done by increasing the intensity of light output or by lowering (warmer) colour temperatures (CCT) of light output. Both methods have inherent disadvantages which include higher wattage consumption on a permanent basis which is wasteful of energy, while warm CCT reduces the visibility under normal (clear or non-fog) conditions. The INTELLIGENT ANTIFOG PowerLED Flood Light fixtures are designed to intelligently adjust their intensity (or colour temperature) depending on the presence of fog. It can automatically detect fog and dynamically adjustment the brightness or CCT or both in real-time to improve visibility in foggy conditions

According to the company, the BINAY I-FOGSENSE INTELLIGENT ANTIFOG PowerLED Flood Light incorporates an intelligent fog detection unit to dynamically increase the light intensity by up to 2 times or change the colour temperature (or both), when the presence of fog is sensed by its accompanying IntelliFog Detector. These PowerLED lights use highly reliable high efficacy LEDs and offer energy savings of up to 40% over the standard LEDs and even more than 70% over conventional lighting when LEDs are coupled with energy-saving controls.