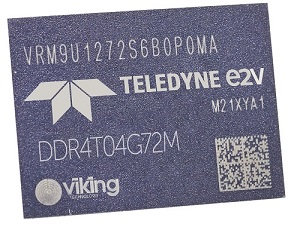 In a bid to offer the next generation solution for ultra-responsive low latency operation, Teledyne e2v has announced the DDR4T04G72M – a radiation-tolerant DDR4 memory chip that features a total 4GB capacity. It is currently validated at 2133MT/s with a target to increase that to 2400MT/s in the near future and features a 72bit bus, where 64bits are dedicated to data and 8bits to error correction code (ECC). Furthermore, high-reliability manufacturing and radiation-tolerant robustness make it highly suitable for dealing with the rigours of space environments.

Efficient operation in a small space

The DDR4T04G72M enables increased performance while taking up minimal board space – something that is certain to be of value in highly space-constrained, densely-packed satellite designs. It can be used in conjunction with processors and FPGAs having a DDR4 controller, and is in particular embedded on Teledyne e2v Space version of Qormino Common Compute Platform together with a space version of NXP LS1046 quad-core processor (QLS1046-4GB).

In order to maintain continued operational reliability, the thermally-enhanced packaging technology accelerates heat dissipation. This allows Flight Models to be available up to an extended temperature range of -55 degrees Celsius to 125 degrees Celsius. It is compliant with NASA Level 1 (NASA EEE-INST-002 — Section M4 — PEMs) and ECSS Class 1 (ECSS-Q-ST-60-13C).

Radiation tests have been performed on this memory chip. In particular, the memory has been demonstrated to be single event latch-up (SEL) free up to 60+MeV.cm2/mg.

With 15mm x 20mm x 1.92mm dimensions, this new space-grade device comprises an array of Micron based memory chips – all integrated into a single package.