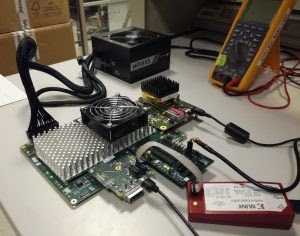 In response to the ongoing advances in programmable logic technology, Teledyne e2v has made further enhancements to its portfolio of data converters, along with the high-speed SERDES technology that supports them.

The new data converters are each able to interoperate with their associated FPGA through the incorporation of a form of the ESIstream high-speed serial interface protocol that has been modified for use with the KU060 series. With a 12.5 Gbps data rate, ESIstream delivers industry-leading operational parameters, in terms of both heightened data efficiency and shortened serial link latency levels. Additionally, it facilitates the synchronization of multiple lanes and devices.

“The space-constrained nature of modern high-density hardware deployments means that the area of programmable logic fabric allocated to serial interfacing needs to be reduced” explains Stéphane Breysse, Product Applications Engineer – FPGA Interfaces at Teledyne e2v Semiconductors. “This is why the ESIstream IP is such a valuable addition to our overall data conversion offering. It enables greater degrees of optimization to be realized and makes better use of available programmable logic assets, while also achieving superior reliability characteristics.”

The company aims to encourage the widespread adoption of ESIstream in high-performance FPGA system designs for achieving elevated sampling rates, while still keeping the firmware overhead involved to a minimum.

ESIstream is available license-free, with the additional benefit of downloading the related code and then making alterations to it to fit their specific requirements (such as enhanced redundancy mechanisms, etc.).