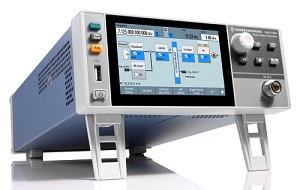 Rohde & Schwarz has released a new multi-standard and fully configurable platform, the R&S SMCV100B vector signal generator for automotive, broadcast, navigation and wireless applications, ranging from the lab to production.

The R&S SMCV100B can cover the 5G NR extended FR1 frequency range of up to 7.125 GHz, making it ideal for mobile communications applications. It also uses the R&S WinIQSIM2 simulation software, which provides support to all common cellular and wireless connectivity standards, including standards for IoT and Wi-Fi (802.11xx) and many more. In total, more than 30 standards along with an arbitrary waveform generator to output user-defined signals can be used.

In the automotive industry, the R&S SMCV100B is suited for end-of-line testing of car radios or GNSS navigation equipment. Broadcast standards can be combined with mobile communications, wireless and navigation standards. For Go/NoGo tests, the generator can offer GPS, GLONASS, Galileo and BeiDou signals of a single navigation satellite. Predefined, time-limited I/Q sequences can be output for functional tests with fixed satellite positions. As only one instrument is needed for a wide variety of applications, its flexibility allows it to be deployed for tasks on a production line at any time. This reduces the potential number of spare units and decreases the downtime on production lines.

The R&S SMCV100B supports analogue and digital radio standards as well as second and third-generation digital terrestrial and satellite-based television standards. The platform supports ATSC 3.0 in addition to the DVB-T2 and DVB-S2X standards, making the availability of worldwide used FPGA-based real-time coders for broadcast standards.

The R&S SMCV100B with the help of advanced direct RF concept can generate output signals for frequencies up to 2.5 GHz. This allows I/Q modulation and RF signal generation to be performed in the digital domain, eliminating the I/Q imbalance errors and LO leakage commonly seen with conventional analogue I/Q modulators. With the new concept, the SSB phase noise performance of the signal generator is very good. An analogue mixing concept is used to generate frequencies above 2.5 GHz.