The world’s first “all-in-one” full-colour microLED display is a power-efficient display technology that will enable engineers to build high-quality displays for AR/VR applications. 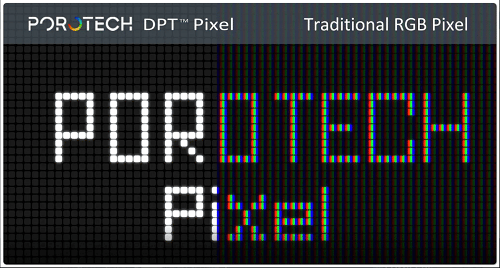 The display employs a class of Gallium Nitride (GaN) materials, DPT which enables a single microLED diode for all colours. The current technology employs an RGB (red-green-blue) sub-pixel model, which increases the size of the display, and reduces the resolution and cost of manufacturing. DPT can enhance the pixel density and resolution up to 4 times thus lowering the cost of displays, reducing power consumption and providing better colour, brightness and efficiency.

According to a few experts, the microLED display can solve a lot of fundamental technical problems related to the quality of microLED displays, which included manufacturability and system integration. Furthermore, the display is able to cover the entire colour spectrum using a single microLED chip and it can also emit colours such as “pure white”, which was not possible by the existing RGB sub-pixel model.

Dr Tongtong Zhu, Porotech’s CEO and Co-Founder say: “This doesn’t just herald widespread adoption of consumer-grade MR, VR, and AR. In fact, DPT also offers radical improvements in TV, signage, and smart wearables in both consumer and professional contexts. By allowing pixels to move beyond RGB and quadrupling the resolution of any given display, DPT is set to unlock new uses for displays in every segment of society.”