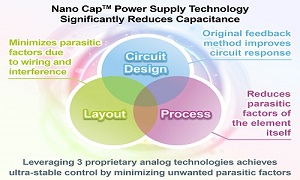 The growing awareness and requirement for sustainable energy consumption have led to providing new methods of electrification in numerous applications, that all need a variety of voltage sources stabilized by capacitors. Especially in the automotive field, demand for innovative electrical components is increasing, thanks to the technological advances made in EVs and autonomous driving.  There is also an increasing demand for external components and PCBs, leading to a rise in the cost of Bill of Material.

To provide a solution to this, ROHM has announced the development of Nano Cap™ power supply technology that ensures stable control of power supply circuits in the automotive and industrial fields – even with ultra-small capacitances in the magnitude of nF. This addition, that aims to reduce the number of external capacitors required for linear regulators, follows the development of ultra-high-speed pulse control technology Nano Pulse Control™ and ultra-low current technology Nano Energy™.

A circuit typically consisting of a linear regulator and MCU, a 1uF capacitor is usually required at the output of the linear regulator while 100nF at the input of the MCU. However, the Nano Cap™ technology eliminates the need for the capacitor at the regulator output and ensures stable operation with just the 100nF input capacitor. By decreasing the number of capacitors along with the capacitance needed for power supply circuits in the automotive and other fields, one can achieve minimising the circuit design load. 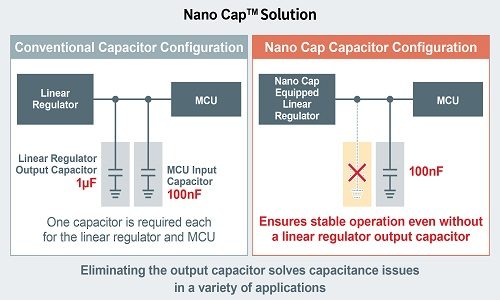 Nano Cap provides stable control of linear regulator output by improving response in analogue circuits while minimising issues related to wiring and amplifiers, making it possible to reduce the output capacitance to less than 1/10th over conventional solutions. 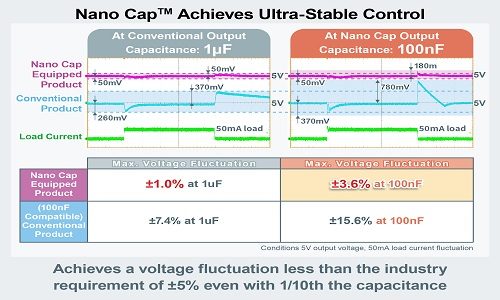 Given the industry requirement for output voltage fluctuation of ±5.0 per cent (max) with respect to 50mA load current fluctuation with 100nF capacitance, Nano Cap™ equipped chips can achieve a stable operation of ±3.6 per cent as compared with conventional linear regulators whose output voltage can vary by as much as ±15.6 per cent.

Refers to ROHM’s ultra-high-speed pulse control technology for power supply ICs that achieve a switching ON time (control width of the power supply IC) in the order of nanoseconds (ns), making it possible to convert from high to low voltages using a single IC – unlike 2 or more power supply ICs used in conventional power solutions. This contributes to greater miniaturisation and system simplification in 48V applications ranging from mild hybrid vehicles and industrial robots to base station sub-power supplies.

This ultra-low current technology features a no-load current consumption in the nA range by minimising the trade-off that occurs when reducing current consumption at ultra-light loads. As a result, long-term operation in compact battery-driven applications, including portable devices, wearables, and IoT can be supported.

Linear regulators utilizing Nano Cap™ technology as well as LED drivers that have built-in Nano Cap™ equipped regulators are scheduled to be released in 2020.

ROHM is committed to further enhancing the development of Nano CapTM technology to eliminate the need for capacitors while expanding the use of this technology not only to linear regulators but Op-amps, LED drivers and other analogue ICs as well.