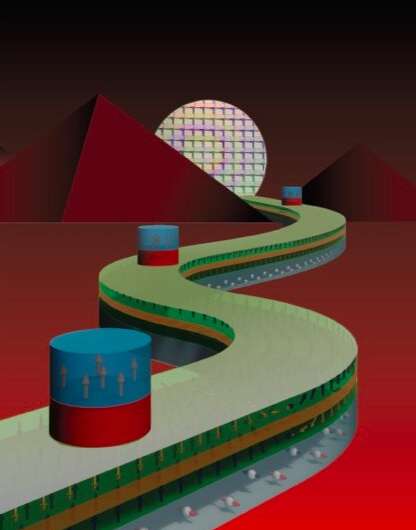 Researchers found a way to electrically control magnetic domain walls and made a path for the development of new computing systems to store and process information.

Magnetic domain walls have gained much attention since the past decade due to their potential to be used as memory and logic devices. Domain walls (DWs) are boundaries between two adjacent magnetic domains. The ability to control or manipulate these domain walls precisely could lead to the development of novel and highly competitive devices.

Researchers at Imec have developed new DW devices with perpendicular magnetic tunnel junction (MTJs) as write/read components. The device consists of multiple MTJs interconnected by a nanotrack. According to the researchers, the read/write components could achieve performances comparable to those of existing magnetic random-access memory technology. The DW motion between the MTJs can be controlled by spin orbit torque. The study is published in Nature Electronics.

“Over the past decade, research mainly focused on exploring novel physical mechanisms in different materials to enable fast DW motion,” Eline Raymenants, a Ph.D. candidate at IMEC who carried out the study, said. “These discoveries have offered various options in term of materials for the DW conduit layer in high-performance devices. However, so far, a complete functional DW device has not been experimentally demonstrated at nanoscale.”

Many engineers and researchers have theoretically explored the DW based devices but practical realization is difficult. This is due to the lack of electrical means to read and write DWs at the nanoscale.

Researchers were able to overcome this challenge by realizing fully operating DW devices based on perpendicular MTJs with electrical reading and writing capabilities, as well as fast DW motion via spin-orbit torque. In other words, they made an all electrically controlled nanoscale DW device.

Existing DW based reading and writing devices rely on external magnetic fields which are not compatible with high-speed DW motion. Devices fabricated using these methods also have limitations associated with the etch patterning steps of their manufacturing processes.

“To overcome these challenges, we developed a hybrid free layer MTJ stack in which a second free layer for DW transport is incorporated into the conventional MTJ stack,” Nguyen said. “Our DW device based on hybrid free layer design simultaneously benefits from the energy-efficient write and read processes of current magnetic random access memory technology and from fast DW motion in the separate DW conduit layer.”

The device is fabricated in 300 mm CMOS fab on full wafers. The researchers, however, have only demonstrated the basic operation of DW devices and further progress has to be made in the direction of making highly competitive DW devices.