While conventional electronics relies on the transport of electrons, components that convey spin information alone may be many times more energy efficient. Physicists at the Technical University of Munich (TUM) and the Max Planck Institute for Solid State Research in Stuttgart have now made an important advance in the development of novel materials for such components. These materials may also be the key to quantum computers that are less susceptible to interference.

Hopes ran high when the first representatives of a new class of materials – topological insulators – were discovered some 15 years ago. Researchers predicted that the unique electronic structure of these materials would give rise to special properties on their surface, such as energy-efficient information transmission, which could facilitate the development of novel electronic components in a wide range of applications.

But to date, these possibilities could not be readily modified and controlled in applications. Despite the greatest of efforts, technological exploitation has been a long time coming. This may be about to change thanks to the discovery made by a team headed by Christian Pfleiderer, professor for the Topology of Correlated Systems at the Technical University of Munich. 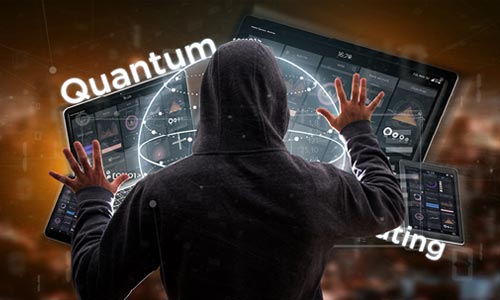 The search for crossings

While the energy levels of the orbitals in an atom increase in a specific order, in solids the order of the energy levels, which stem from different atomic orbitals, may also be reversed depending on the direction of motion and the wavelength of the electrons.

The orientation of the energy levels originally associated with different orbitals may thus intersect for certain directions of motion and wavelengths. In other words, the energies of different orbitals are identical where they intersect. Of particular interest are materials in which these crossings appear at the level of the electrons responsible for conductivity. Physicists refer to this level as the Fermi energy.

The discovery of topological materials

Crossings between energy bands of real materials have been known since the 1930s. However, except in very rare cases, they cancel by the mutual repulsion of the electrons. This effect leads to gaps in the energy bands precisely at the expected crossings. Since all known examples of crossings in the band structure occurred far from the Fermi energy, they were regarded merely as a trivial curiosity.

All of this changed with the discovery of topological insulators in which the electronic structure of the material surface produces crossings exactly at the Fermi energy. Further observations revealed that these crossings are particularly stable because of the unique character of the electrons’ quantum mechanical wave function, which prevents cancellation through electron repulsion.

Transferring information without loss of energy

The fact that crossings of topological insulator surfaces are always at the Fermi level leads to special properties of the electrical conductivity, which allow electric charges and spin information to be transferred without any loss of energy.

However, it soon became apparent that topological insulators are very sensitive to material impurities, which effectively short-circuit the surface properties and prevent useful technological implementations.

However, the discovery of topological insulators triggered an intensive and systematic search that ultimately uncovered many bulk materials with topological crossings between the energy bands inside the materials. Examples include Weyl metals, Dirac metals, and Chern insulators, among many others. Scientists expect that the crossings inside these materials will result in special properties on the surface that are amenable to technological exploitation.

Unfortunately, researchers have not been able to predict whether topological crossings in any of the known materials are exactly at the Fermi level. This was because the crossings known so far occured only at discrete points or along specific lines, meaning that they coincide with the Fermi level merely by chance.

But the last point is crucial for technical exploitation. Moreover, to be able to switch crossing points on and off by simple means in applications seemed completely out of reach.

Switchable by a magnetic field

The scientists headed by Dr. Marc Wilde in Prof. Pfleiderer’s team have now demonstrated that there are materials with planes through which the bands always pass in pairs. These are known as nodal planes and make localizing crossings at the Fermi level easy. They are always exactly where the conduction band edges pass through such a plane. One of the first examples are single-crystals of manganese-silicon.

Together with Dr. Andreas Schnyder at the Max Planck Institute for Solid State Research in Stuttgart, the research team successfully elucidated the theoretical foundations for this behavior. “An essential prerequisite is the presence of so-called ‘non-symmorphic’ symmetries. In manganese silicon, this is a twist in the arrangement of the atoms,” says Andreas Schnyder. “But that’s not all,” says Marc Wilde, “We were also able to show that magnetization in these kinds of materials can cancel the crucial symmetries and, as such, the nodal planes. The magnetization direction is effectively like a pair of scissors that we can use to cut through the Möbius strip.”

Building on this insight, Andreas Schnyder and his colleagues in Stuttgart conducted a comprehensive analysis of all known classes of crystal structures to identify those with the same properties. This is now the basis for future targeted searches for comparable materials.

“Using manganese silicon as an example together with the recently developed theoretical principles, we may now select and optimize materials in a concerted effort,” says Christian Pfleiderer. “These new materials could enable not only much more energy-efficient electronic devices, but also absolutely novel applications in which we use external magnetic fields to control the effects of magnetization on nodal planes.”

“In this way,” Pfleiderer hopes, “these materials might even facilitate topological quantum computing in the future. Because of the characteristics of the crossing points, corresponding QBits would be much less sensitive to interference.” Quantum computers built on this basis might even shake off the requirement of operating at temperatures near absolute zero.