The technology uses Liqualloy – an original magnetic material developed by Alps Alpine – instead of ferrite for magnetic components in transformers and resonant coils. Use of the material here in a circuit that operates in On/On & On/Off mode simultaneously enables both high peak conversion efficiency of 96.8% and compact size – the total size of magnetic components comes to one third compared to existing methods – even with a high output power of 3.3kW. High output power ensures compatibility with the high power requirement for autonomous driving and in-vehicle entertainment systems while the compact size and high conversion efficiency contribute to space efficiency and reduced power consumption in electric vehicles.

Background to the Development

Home appliances and other electronics use different types of electricity (alternating current, AC or direct current, DC) and voltages depending on what is best for the function they are performing. They, therefore, need to convert electrical power in a manner suited to the application and purpose. Power conversion is implemented using power electronics technology. As virtually all electronic devices run off a direct current, DC-DC converters play a vital role in converting the supplied DC power voltage into an optimal DC voltage that varies with the application. Given heat generation during power conversion results in power loss, improving power conversion efficiency to reduce that power loss leads to energy efficiency in all kinds of electronics, and by extension, contributes to the preservation of the global environment.

Specifically, in regard to electric vehicles, lithium-ion batteries are frontrunners to become the dominant type of main battery. They employ a direct current with a high voltage of around 400V, while electronic devices drawing from that power supply, including navigation systems, headlights and power windows, run off low-voltage DC of around 12V. The voltage conversion from one to the other is performed by an automotive DC-DC converter (also known as an auxiliary converter).

As efforts to achieve carbon neutrality gather momentum, controls on vehicle exhaust emissions are becoming more stringent. It is critical that electric vehicles are put to practical use and popularised. For electric vehicles to become widespread, infrastructure needs to be put in place. It also demands that batteries have a larger capacity, vehicles are lighter, and power conversion efficiency is improved, allowing for longer driving ranges. Not only that, power consumption by vehicles is on the rise due to the greater sophistication of automated driving systems and in-vehicle entertainment systems. As a solution to these issues, there are urgent calls for technological innovation of power electronics products, including DC-DC converters.

Outline of the Development

Isolated TriMagiC Converter, the isolated DC-DC converter circuit technology newly developed by Alps Alpine, uses Liqualloy – the company’s original magnetic material with characteristically low permeability, high saturation flux density and low loss – for magnetic components in transformers and resonant coils instead of ferrite. Use of the material here in a circuit that operates in On/On&On/Off mode simultaneously enables both high peak conversion efficiency of 96.8% and compact size – the total size of magnetic components comes to one third compared to existing methods – even with a high output power of 3.3kW. 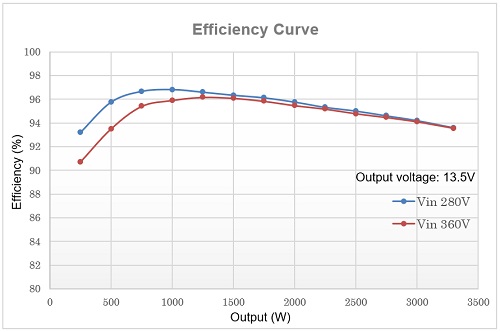 The circuit contains three magnetic components – two transformers with the same properties and a resonant coil for zero voltage switching (ZVS). With current input from a bridge circuit, the two transformers repeatedly alternate between On/On and On/Off operations. Because the transformers simultaneously output and store energy from the input side during both On/On and On/Off operations, flux density increases around half as much as with an ordinary On/Off type converter. As this storing operation performs a rectifying role in place of a smoothing coil, the latter is not required. In addition, the high saturation flux density of Liqualloy allows for smaller magnetic components and, by extension, a more compact circuit. Changes in flux density are smaller, too, enabling high output power and high conversion efficiency. 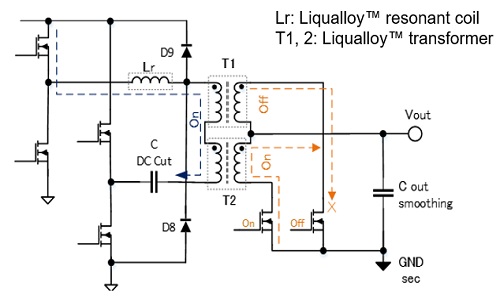 In regard to power supply circuits, compact size and high conversion efficiency are considered the main forms of added value. Until now, compactness has been achieved using techniques of composition and miniaturisation relating to power semiconductors and capacitors. Most recently, even smaller circuits have been realised without affecting high conversion efficiency by increasing operating frequency using silicon carbide (SiC), gallium nitride (GaN) or other next-generation transistors with low switching losses. However, there are limits to how well this method can improve conversion efficiency. In developing this On/On & On/Off mode circuit, Alps Alpine focused on magnetic components that could not be made smaller through their composition or miniaturisation. Compact size and high conversion efficiency are realised without increasing operating frequency using original magnetic material Liqualloy.

Samples are to be made available for researching the market and evaluating performance to commence sales of components using Liqualloy, including magnetic cores, transformers and resonant coils, around October 2023.