Crypto Quantique, a specialist in quantum-driven cyber security for the internet of things (IoT), is now making an Amazon AWS trial version of its QuarkLink IoT security platform available free for 30 days.

QuarkLink TrialPack enables the provisioning, onboarding, and management of virtual IoT devices via a simple, intuitive user interface. No specialist expertise is needed to deploy and use the platform. The functions of device identification based on digital certificates, encryption, and Public Key Infrastructure (PKI), are all largely automated and run in the background.

With a few keystrokes, tens of thousands of devices can be onboarded to AWS within minutes. They can then be monitored and have their certificates automatically revoked or renewed.  QuarkLink also has a signing capability to support secure firmware downloads and over-the-air updates. 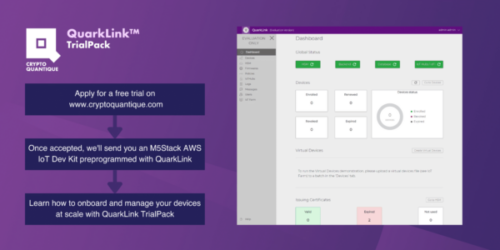 The trial version facilitates the creation and configuration of custom security policies. Virtual devices can be created and deployed across the globe to simulate a real-world scenario. Certificates can be viewed, enrolment and onboarding monitored in real time, and MQTT messages (the standard IoT protocol) tracked.

QuarkLink TrialPack comprises a unique cloud-based QuarkLink instance, accessible via a URL provided, a packaged, pre-programmed M5Stack IoT Development Kit, a USB-A to USB-C cable, and electronic collateral that includes a user manual, quick-start guide, and a link to a demonstration video. Free technical support is included during the trial period.

Chris Jones, Crypto Quantique’s director of applications, said, “However many videos and brochures you see for a product like QuarkLink, there’s nothing to beat getting your hands on the product to really understand how powerful and easy it is to use. QuarkLink amazes those who appreciate the challenges of end-to-end IoT device security when we demonstrate it face-to-face. QuarkLink TrialPack is an extended hands-on experience that will convince even the most sceptical that IoT security is no longer the exclusive domain of cryptography specialists. It’s hands-on proof that IoT security is being democratised as complexity is eliminated while delivering greater security at lower cost.”

QuarkLink TrialPack is designed to run Amazon AWS, but the production version supports multiple cloud services and can be used with on-premises servers or in multi-cloud and hybrid-cloud environments.