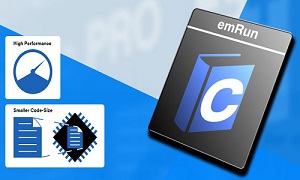 SEGGER Microcontroller announces that Beijing Haawking Technology, a provider of RISC-V-based DSPs, has licensed SEGGER’s emRun for RISC-V Runtime Library for distribution with its compiler tools for HX2000 series chips.

emRun is a complete C runtime library for use with any toolchain. Written from the ground up specifically for embedded devices, emRun is designed to provide high chip performance with the smallest possible footprint. emRun for RISC-V is assembly optimised for RISC-V, resulting in unrivalled performance and code size on RISC-V devices.

In many cases, the reduced code size makes it possible to use smaller microcontrollers and less on-chip memory. This can result in significant cost savings, especially for devices built in large quantities for the mass market. The increase in performance leads to better products with faster reaction times and lower power consumption.

emRun’s value and performance have been widely proven as part of SEGGER’s Embedded Studio IDE, which can also be used to easily evaluate emRun.

The HX2000 series is a real-time industrial control DSP based on the RISC-V instruction set, which integrates high-performance core and application peripherals. It can be widely used in industrial control, motor drive, digital power supply, new energy and other fields.

Within the HX2000 series, Haawking has released the HXS320F2802X and HXS320F2803X subseries into mass production for customer applications. The high-performance HXS320F2833X, featuring Haawking’s H28x 32-bit RISC-V core and Harvard bus architecture, is soon to be introduced.

“For digital signal processing applications, it is important to provide the highest possible performance using as little memory as possible,” says SEGGER CEO Ivo Geilenbruegge. “With the licensing of emRun, Haawking now enables its customers to get the best performance for their industrial control DSPs.”

“SEGGER has made a constant and significant contribution to the thriving RISC-V ecosystem, and is one of the essential driving forces that continues to promote RISC-V to be a more popular processor architecture in the embedded industry,” said Wu Junning, co-founder & Deputy General Manager of Haawking. “The cooperation with SEGGER will also provide strong support for the research and development work of Haawking. The emRun library is used for our HX2000 series DSP based on the RISC-V instruction set. As the RISC-V ecosystem continues to grow and our product line continues to expand, we look forward to more and more opportunities to work together in the future.”