Designers of spaceflight-qualified systems have a great need to reduce development time, cost and risk in their systems. Microchip Technology Inc. proposed the concept of starting with Commercial-Off-The-Shelf (COTS) devices and then replacing them with space-qualified, Radiation-Tolerant (RT) equivalent parts. Microchip today announces it has extended its family of COTS-based, RT SuperFlash options for these applications and is bringing the Microchip memory technology’s unrivaled 50 kilorad (krad) Total Ionizing Dose (TID) tolerance to a 64-Mbit serial quad I/O NOR flash memory device for use in harsh aerospace and defense system environments.

“The SST26LF064RT SuperFlash device brings the best TID performance on the market to a 64-Mbit serial quad I/O memory solution that works alongside any SRAM-based FPGA in diverse space applications,” said Bob Vampola, associate vice president of Aerospace and Defense at Microchip. “It is ideal for systems used in Low Earth Orbit (LEO) space constellations and other harsh radiation environments where companion flash memory is required for storing the critical software code or bitstream that drives the complete system.” 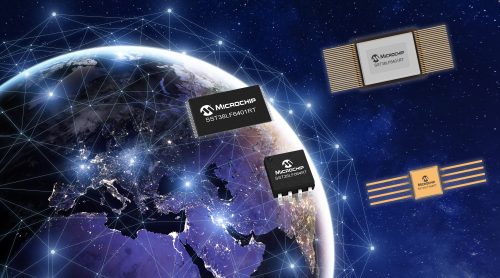 Microchip SuperFlash NOR flash memory products use a proprietary split-gate cell architecture to improve performance, data retention and reliability as compared to conventional stacked gate flash. They eliminate the complexity of power management switching to achieve their industry high TID even while the flash is still biased and operating in systems such as satellite on-board computers and different types of controllers for motors, sensors, solar panels and power distribution. Proven in industrial applications, Microchip’s RT SuperFlash technology has been offered as a parallel-interface solution with its 64-Mbit SST38LF6401RT device that is now space-qualified and available in-flight models. With the SST26LF064RT product, designers now also have a serial quad I/O 64Mbit memory option.

An application note explains how to use the serial 64-Mbit SuperFlash device with Microchip’s SST26LF064RT RT flash reference evaluation board and space-qualified SRAM-based FPGAs. Like Microchip’s parallel SuperFlash memory, the serial SuperFlash option can also be used as configuration memory with an FPGA and other Microchip solutions such as the Arm® Cortex®-M7- based SAMRH707 radiation-hardened microcontroller (MCU). It can also be used with the RT PolarFire FPGA to support in-flight system reconfiguration.