Body paralysis caused by severe neural conditions is one of the most complicated and dreaded things to happen to humans. It makes the daily life of the affected person very difficult, making them unable to perform simple activities such as walking and talking like normal people.

So today, we will be designing a very low-cost automated chair- similar to the one used by the late physicist Stephens Hawking that can help such people improve their everyday life.

As this project is quite big and complicated, we will be developing it in several parts.

Make sure your Raspberry Pi has the latest Raspbian OS and Python Environment. If not, then update it to the latest version.

Now open the Linux terminal and install the following libraries using the given syntaxes.

We will create a smart system that can detect a human face in real-time, which can then detect the location of the eye. By recognising and learning the real-time eye movement patterns, we can use it to navigate to every part of the UI.

For doing that, we will need to import the eyegame module, opencv module and numpy module to the code as we need to capture the video from the camera and process its every frame to obtain the eye movement. 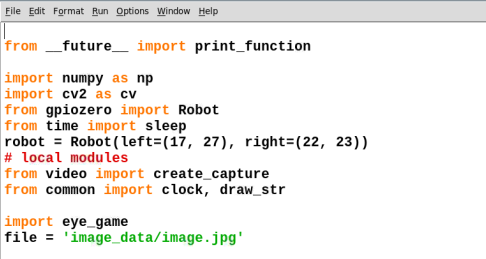 Now, we will create a function that detects the face and position of the eye, captures the frame of that eye position and then transfers it to the eye game. After that, the eye game will detect the eye pupil and the eyeball, which it will compare with the eyeball position from the previous frame for estimating the eyeball movement. By using several if() conditions, we will check whether the movement of the eye is towards left, right, upward, bottom or central directions. 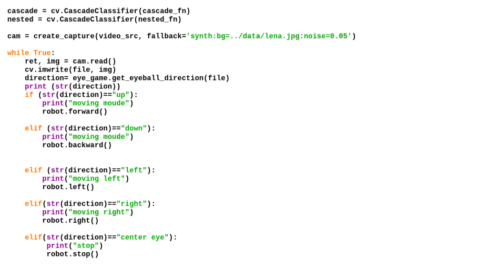 Next, we will create a dummy robot to test out the code for movement of the wheelchair (according to the commands given by the eye movement). After successfully testing the code, we will implement the code on the Stephen Hawking wheelchair made by us. So to do testing we have to create a dummy robot . For that we need two motors and a motor driver and have to make connections as given in the circuit diagram.

For the dummy robot, we will need two motors and a motor driver. Make connections as given in the circuit diagram.

In different parts, we will design the wheel power control and wheel control system of the Stephen Hawking wheelchair model.