The Ins And Outs Of Optical Systems

What is an optical system? Best put, this is a succession of elements that can include anything from dispersing devices to mirrors to lenses down to projection screens. Your eyes are optical systems, too, if you think about it. But in this case, we will focus on artificial systems and their elements. At some points, we will point this back to the eyes to give you a better idea of how these systems work. Here goes:

Lenses are apertures (gaps) in the system designed to narrow or increase the diameter of the beams passing through the system from a given point. In the case of the human eye, this aperture is the iris which, together with the pupils, limits how much light enters the system. In photographic lens systems, this iris lies inside the objective, and you can adjust its diameter to control the depth of the field and the object’s illumination. And for telescopes and microscopes, the iris is the cylindrical mount present in the objective lens. Most optical systems feature a relay lens which can extend the system’s length or invert an image. Military periscopes have such features, and so do common rifles. 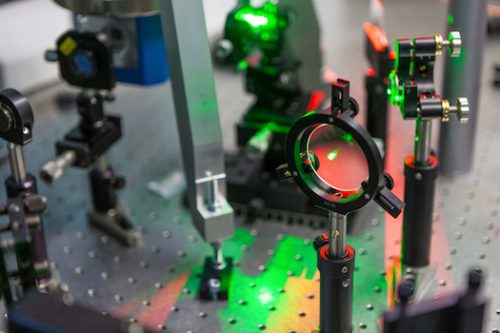 Mirrors are also common in optical systems. Take the example of plane mirrors which are useful in bending light in other directions, which helps to inverse images or offer convenience in viewing images. Curved mirrors are especially useful in reflecting telescopes. Concave mirrors are often used to create the main image in reflecting telescopes, while another mirror works to magnify the image and position it conveniently for viewing.

Most optical systems rely on natural light. However, some, like microscopes and projectors, work using artificial light sources such as tungsten filament lamps. Where there is a need for a very bright light source, carbon or xenon arc come in handy. And in scientific applications, laser beams are often used. These beams are parallel, monochromatic, and are in line with each other, making them highly effective in their applications.

The final image shows in the eye, which is a sensitive detector in the electromagnetic spectrum. One of the most praised detectors is the photographic film which has been used for decades on end. This film can capture images and keep them on record permanently. There are tons of electrical detectors in the market presently, some of which can detect heat radiation. Their ability to produce visible pictures makes it possible to view the images as they are or take their photos for permanent records.

These elements are quite common, and you have likely come across a wide range of these, starting with those used in outdoor theaters. In their simplest forms, these feature a white surface onto which images are projected for viewing. Over time, people have improved the screen materials to add to the brightness of the images. Highly reflective screens have also become common and essential in improving user experiences when using projector screens.

These are pieces of glass arranged at angles and bounded by plane surfaces to transmit light, reflect light, or both. These are common in binoculars, microscopes, and other optical devices, including color television cameras.

These elements work to disperse the colors of light beams into a spectrum. The blue end of the dispersion takes up most space, while the red is quite limited.