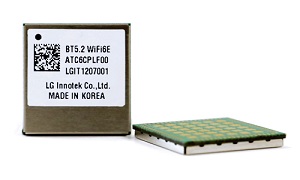 The module combines a communications chipset, a radio frequency (RF) circuit and other components. The module is mounted on multiple components of a vehicle, including the audio-video navigation (AVN) system and smart antenna. A passenger can enjoy movies, games and more on the in-vehicle display or audio system by wirelessly connecting it to a smartphone. The module also allows easier software updates of the automotive navigation system and such.

Thanks to the development of automatic driving technologies, vehicles have now turned into spaces for entertainment and rest. However, Wi-Fi 6E is not suitable for cars due to its limited communication performance caused by the compact vehicle interior. But despite this challenge, the Wi-Fi 6E module promises to offer an enriched experience with the help of its advanced RF and antenna technology. The company has improved its data transceiver performance with the new RF structure and antenna design that minimise any communication interference.

With the automotive Wi-Fi 6E module, a passenger can enjoy high-definition movies or AR/VR games conveniently through the in-vehicle display. High-resolution videos often buffer while playing with the current Wi-Fi modules.

Such an improvement in networking speed is possible because Wi-Fi 6E uses a 6GHz band in addition to 2GHz and 5GHz bands; the higher the frequency, the larger the data transmitted. Also, available bandwidth becomes twice as wide as that of 2GHz or 5GHz. Simply put, the data speed increases as the available volume and pathway of data grows.

The Wi-Fi 6E module also enables seamless internet use with multiple connections. The unique RF and antenna technologies prevent interference even in a compact space as a vehicle.

Also, this product can withstand temperature changes between -40 degrees and 85 degrees. The module is not easily deformed by the low temperature in winter and can endure the heat generated by data transmission. The new module is made to tolerate repeated shrinking and swelling by a larger synapse surface design.

The automotive Wi-Fi 6E module has a small and slim form factor and is compatible with existing modules. For this module, LG Innotek put together more than 200 components including a communications chipset and RF circuit in the one-sixth of a credit card size using the company’s high-density/superfine modulisation technology. Besides, it can be applied to existing devices without any design change as it is compatible with current Wi-Fi modules.