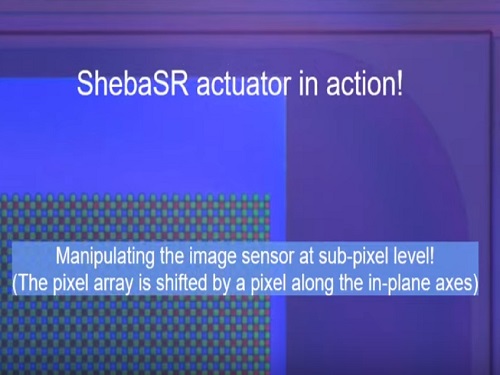 In the current mobile market, camera quality is one of the top issues for consumers, who want to stand out from the crowd by having cutting-edge technology at their fingertips.

With this in mind, Sheba Microsystems has released the ShebaSR that claims to be the world’s first miniature actuator for offering 9x high-resolution images for smartphone cameras. This also means 9x fewer artefacts and 9x more details in the image.

Major players such as Olympus, Panasonic and Sony in the past had released multiple models in their DSLR and mirrorless product lines with pixel-shifting super-resolution. This technology enabled these cameras to achieve an increased resolution equivalent to up to a 4x increase in sensor pixel count, as well as reduced noise and artefacts within each pixel using a 1/2 pixel shift.

Taking a cue from this, the ShebaSR has integrated actuators that deliver ‘DSLR-quality’ images and achieve image enhancement by leveraging pixel-shift super-resolution.

It is to be noted that because image sensors for mobile phones are much smaller than professional cameras, the actuator needs to reliably shift the image sensor by sub-micron increments. The electromagnetic actuators that can work for DSLR and mirrorless cameras are too bulky to fit in the tight spaces of mobile devices and they lack the speed and accuracy to provide more than 4x the image resolution. Therefore, integrating pixel-shift technology remained difficult – until now.

“By leveraging its expertise in the MEMS actuation field, Sheba today is bringing a new DSLR camera feature, long desired by smartphone camera users, into the smartphone world. ShebaSR can precisely shift the image sensor by a distance equal to 1/3 that of a pixel, with repeatability of <20 nm, and an extremely high-speed response; making it not only match but surpass the most advanced DSLR pixel shifting capability using only simple super-resolution algorithms,” said Faez Ba-Tis, CEO of Sheba Microsystems.

Another solid feature of the ShebaSR is that it is remarkably rugged. The product can be subjected to shocks, drops, tumbles, as well as temperature and humidity fluctuations without any performance deterioration.

ShebaSR technology’s combination of unique features such as high accuracy, speed, ruggedness, durability and reliability will effectuate a paradigm shift in the smartphone camera space.