It has incredibly low noise and 9.4 megapixels that enables accurate measurement of the number of photons to create an image 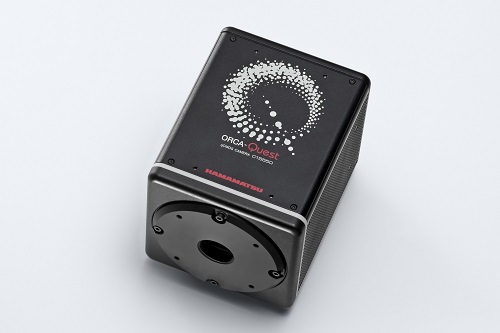 In quantitative imaging, the photoelectric noise generated during the conversion of light into electrical signals determines the lower detection limit of the camera.

To generate even more accuracy, the ORCA-Quest qCMOS scientific camera C15550-20UP from Hamamatsu Photonics takes this photoelectric noise to a level below the signals generated by photons, making the ORCA-Quest the world’s first camera to achieve 2D photon number resolving measurement for accurately measuring the number of photons to create an image. For example, the ORCA-Quest can observe the quantum states of ions and neutral atoms more accurately, making it a promising tool for accelerating research and development of quantum technology for quantum computers and a host of other applications.

The ORCA-Quest qCMOS scientific camera has an incredibly low noise of 0.27 electrons rms and a high pixel number of 9.4 megapixels, made possible by a hi-tech two-dimensional CMOS image sensor.

The ORCA-Quest are in production and available for researchers at universities and companies both in Japan and overseas.