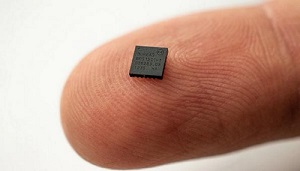 The BOS1211 is a high-voltage, low-power piezo driver IC that is based on Boréas’ CapDrive technology, a scalable piezo driver architecture that provides the foundation for haptic chips. CapDrive delivers greater energy efficiency, low heat dissipation and rapid response times, making chips ideal for devices in which size, power, responsiveness and thermal management are essential.

According to IHS Markit Center Stack Display Production Forecast, it is estimated that more than 52.8 million automotive touch panels will be on the market by 2020. And that number is growing by 4.6 per cent annually.

At the same time, more drivers are using voice commands to make phone calls and send texts, and are receiving navigation instructions via audio. A research conducted by the Stanford University, which compared skin-stretch haptic feedback on the car’s steering wheel to auditory feedback for in-car navigation, concluded that drivers receiving haptic feedback responded better than those receiving audio feedback, as Haptic feedback presents “a smaller cognitive load than the audio cues when driving while aurally or verbally distracted.”

Another research study conducted by the United States Air Force and Arizona State University concluded that drivers responded more effectively to tactile warnings, delivered via the gas pedal or the seat than to visual or auditory warnings when alerted to rear-end collisions. While research is ongoing on whether tactile vs. auditory or visual stimuli leads to more distracted driving, some researchers agree that the cognitive load on the human brain is less when that feedback is tactile.

All these indicate that touch-based HMIs in cars are here to stay.

“Haptic feedback is as old as the human experience, which is why we find it so satisfying to know that an object responds to our touch,” said Simon Chaput, founder and CEO, Boréas Technologies. “The advent of the digital world has increased our need for haptic feedback, and that’s why we’re seeing multiple Tier 1 automotive manufacturers replacing buttons and touchpads with haptic-feedback touchscreens as well as top automotive suppliers embedding haptics into their new display products.”

“Touch HMIs in cars are evolving with the times,” said Stefan Benkhof, head of product marketing of the TDK Piezo Business Unit. “From the knobs and buttons of one-hundred years ago to the flat screens that came to market over the last twenty years, clear and responsive haptics marks the next important interface advancement in automobiles.”

The BOS1211 is currently sampling to key customers. To speed design to production with the BOS1211 with TDK 120V PowerHap actuators, Boréas offers a plug-and-play development kit for piezo haptic feedback in automotive and other applications that require high-force haptic feedback.