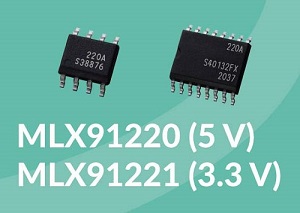 Presenting two new Hall-effect based integrated current sensors, MLX91220 (5 V) and the MLX91221 (3.3 V) that are qualified for automotive and industrial applications, such as on-board chargers (OBC), DC-DC converters, power supplies and small electric drives. With 300 kHz bandwidth, they suit a variety of power conversion applications lower than 50 A RMS, resulting in a response time of just 2 us, which supports high switching frequencies and more accurate tracking in control loops.

The MLX91220 improves the dual on-chip overcurrent detection (OCD) function, which enables essential monitoring mechanisms using both an internal and an external feature. The internal OCD threshold can be selected in or out-of-range, with a response time of 2 µs. The external OCD threshold can be set, through an external reference voltage, within or close to the output operating range, with a typical response time of 10 µs.

Both can be used in one application, to offer redundancy or detect separate conditions of short-circuiting and out-of-scope.

Unlike most current sensors, the MLX91220/21 does not rely on ferromagnetic concentrators. Instead, an internal differential sensing concept detects the generated magnetic field by the integrated primary conductor. This differential concept also provides a high level of stray field immunity, enabling higher density power electronics, as the sensor is less affected by stray magnetic fields in close proximity.

The current sensors come in SOIC8 and SOIC16 packages, rated at 2.4 kVrms and 4.8 kV respectively. The SOIC16 package also offers a lower primary conductor resistance, thanks to its higher pin count and increased conductor thickness. Both variants have lower resistivities of 0.85 mOhm (SOIC8) and 0.75 mOhm (SOIC16).

Samples and development kit are available now from Melexis.