For instance, MSO1000Z series from Rigol and SDS2000 series from Siglent provide serial triggering functions at an affordable price. See Table for pricing and other details.

Interesting developments in portable, pocket-sized MSOs
USB based tools used with PCs or laptops. When engineers look for flexibility, portability and ease of measurement, universal serial bus (USB) oscilloscopes prove to be a practical option.

USB MSOs are mostly used by engineers and technicians working in service, testing, equipment repair and manufacturing. Some MSOs are connected via USB, Ethernet or even RS232 and are widely used for a variety of applications starting from research and development (R&D) to embedded designs and educational purposes.

An MSO integrated with a protocol analyser enabled with USB 3.0 and Wi-Fi capabilities was recently introduced; a first of its kind in the PC based test instrument group.

USBee QX comes with a bandwidth of 600MHz and a combination of four analogue and 24 digital channels. One unique feature is that it can record 32 days of traces and display protocols as it has a buffer memory of 896 Msamples.

An added benefit is that this device includes all popular serial protocols that usually need to be paid for separately in the case of benchtop MSOs.

Another option for hackers, hobbyists, students and engineers is a tool nearly the size of a Snickers chocolate bar. This device from BitScope comes with 20MHz bandwidth, which is apt for small- and, probably some, medium-level embedded applications. Completely user programmable, BitScope Micro also features two analogue channels and six digital channels. It also behaves as an 8-channel logic analyser, arbitrary waveform, a clock generator and spectrum analyser. In addition to Windows, Mac and Linux, it is also compatible with Raspberry Pi including its latest versions, Model A+ and Model B/B+. 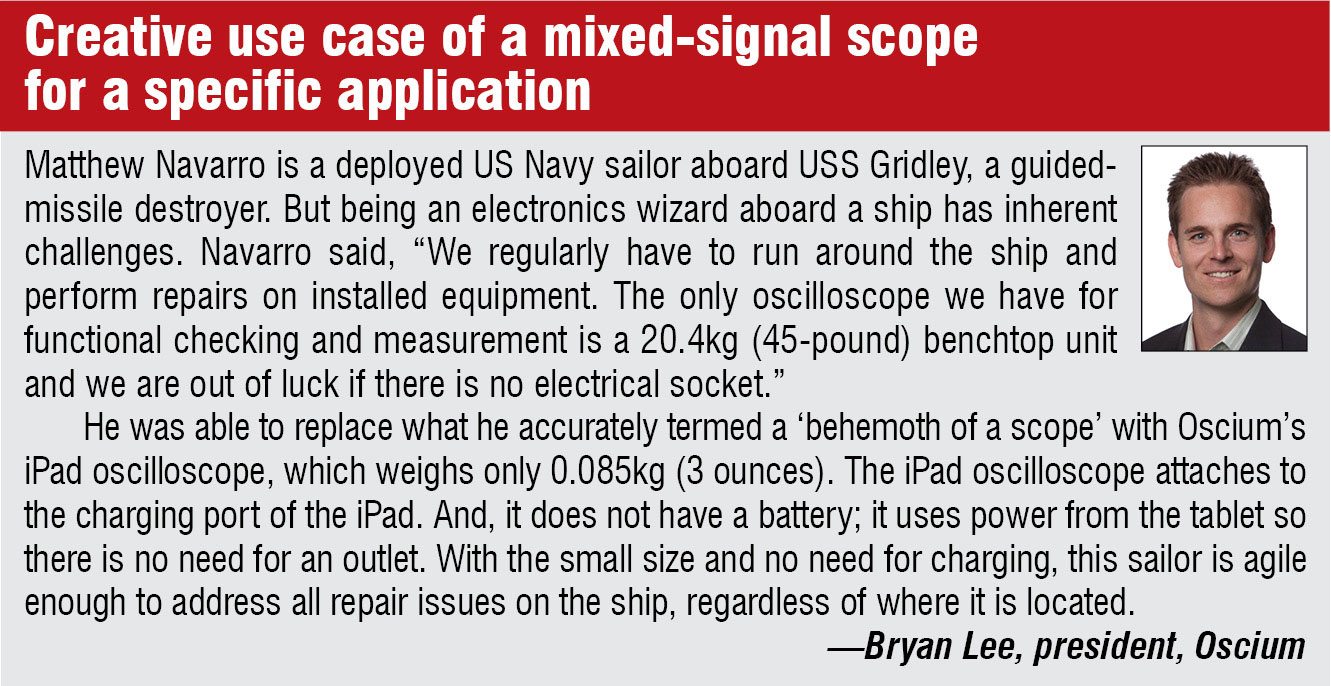 Tool specifically for Apple phones and tablets. An answer to test-bench tools with mobile and touchscreen advantage is Oscium’s iMSO-204L, a plug-and-play solution. Although specifically designed only for Apple devices, such solutions have become a viable alternative if engineers prefer to switch over to touch interface from traditional knobs.

These transform iPads or iPhones into a variety of test equipment tools like spectrum analysers, power meters, logic analysers and oscilloscopes. These are ultra-portable and small enough to fit in a pocket.

Bryan Lee, president, Oscium, says, “It is powered by the host device with less than 100mA of current (less than what it takes to power a small LED light), so there is very little impact to the battery life, eliminating the need for an external power source.”

He adds, “The software is very easy-to-use. It can be downloaded from Apple App Store and viewed in demo mode without access to hardware. After hardware is connected, field engineers can monitor, store, and email results while on-the-go.” He also claims that no other oscilloscope offers a solution quite like this unique system.

Quite recently, three software updates were made. As a result, users can now make advanced measurements between cursors, observe signal clips indicated by a colour change and can trigger in rolling mode.

Lee notes, “Not every user will be impacted by these changes but it demonstrates that we are continually investing in the tool and listening to our users.”